I managed to finish off the orcs I need to put on my game on November 17th. There are 11 bases of these fellows all told, which should be sufficient!

These are a mix of Caesar and Dark Alliance orcs. The Caesar are the taller, more pig-like orcs while the Dark Alliance tend to be shorter and extremely two dimensional. 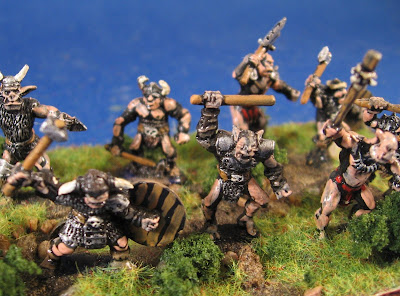 That said, they all painted up fairly nicely, with the Dark Alliance hardly requiring any work beyond drybrushing and a bit of detailing 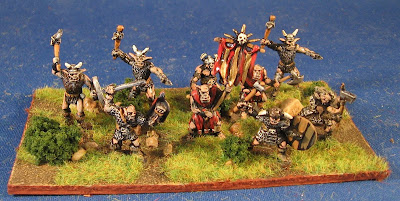 There are a mix of command figures between the two manufacturers. I'm partial to the banner in the Caesar box. But the Dark Alliance box contains a horn blower and a drummer. I'll have pictures of these in my next post. 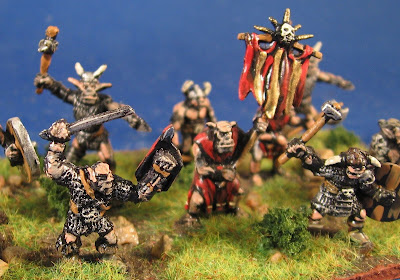 I also finished up two bases of trolls. These are Caesar figures from their adventurers box. I saw the blue paint scheme at the club (I think) and tried to replicate what I could remember. 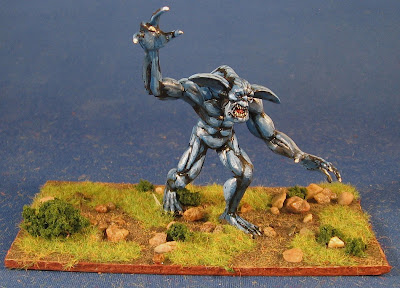 And from the back. He is on a 120mm wide base to give you a sense of his size. 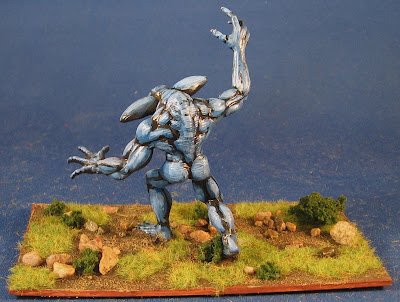 Next Up: I have completed the command poses I need to wrap up most of my fantasy armies (need to do a few seige engines and whatnot) so I will post them up shortly. On the painting bench is a 15mm Goblin HoTT army which I will be looking to sell. Then maybe some more 1/72.
at 12:06 PM

Woa. That troll is scary! The defined muscles and brush strokes make him look like a skinned troll! Creepy! I have a couple Black Tree trolls that I'll be using with my 1/72 guys. I don't think they're sold anymore. They look alot like GW sculpts, so I'll bet there were some legal issues.

Yes, I was going for freaky monster from hell. Glad to know I hit it!