Bruce brought his Boxer rebellion game out to the club this week for its debut. We had a good turn out for the first day of school, with 7 guys around the table. 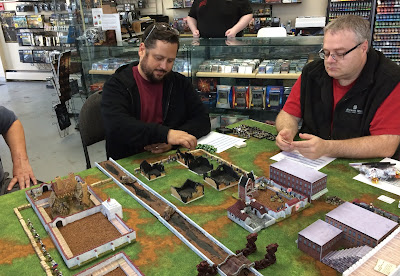 Chris played the English, Scott the Japanese, Richard the Russians, Terry the Germans, and Chen the Americans. Bruce GM'ed and I helped out running a few Boxer units when they appeared to harry the western powers. 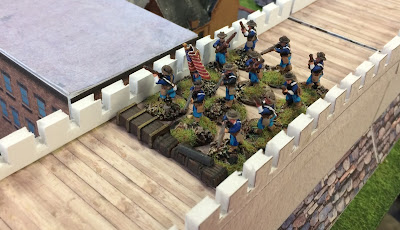 The westerners had amazing luck with the supply cards, never running short of anything and having to dicker among themselves. The Boxer sappers also helped them by shrinking the perimeter a bit. 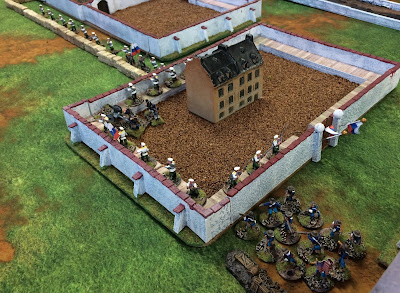 That said, it was not a cake walk as the Germans and the Americans both lost units. There was time for a serious redeployment by the Germans. The British ran into some fire problems but managed to take care of some red lantern units. 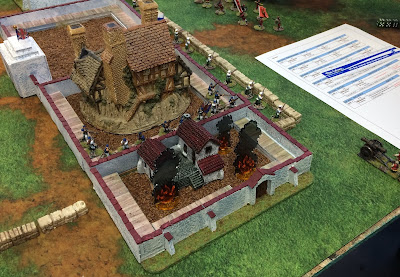 For their part, the Boxers never really showed up in enough strength anywhere to really push the western powers. Sure, they killed some Christian missionaries and blew some embassy walls, but that was about the extent of it. 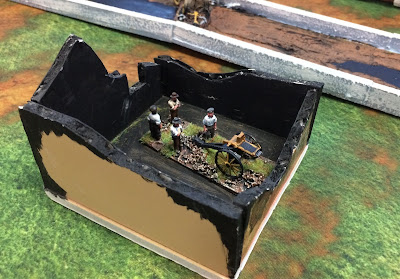 We did see the appearance of the Parsons with their machine gun, which did a good job of cleaning up the last big push by the Boxers. Overall, a fun game with all 7 players engaged.
at 5:00 AM

IS this based on the game once published in Wargames Illustrated #27?

Yes. Bruce updated combat and other miniature mechanics by lifting from Dragon Rampant. I think he also altered the card deck somewhat.

Excellent.
I also adapted that game some years ago, for a fantasy setting. I replaced the Boxers with ratmen (skaven), who could appear through sewers etc anywhere in the city. Great fun. Some pictures and a game report here: http://snv-ttm.blogspot.com/2015/01/lownheim-blast-from-past.html

Is there a copy of these rules floating around somewhere? I want to tackle this period in 54mm.