Today was the club's annual MayDay convention. One of the games I ran was a big battle DBA game. I took the scenario from Mr. Farrow's blog. I used the Humberside extension to the DBA rules with limited recoils, mobile generals and a breakpoint roll. 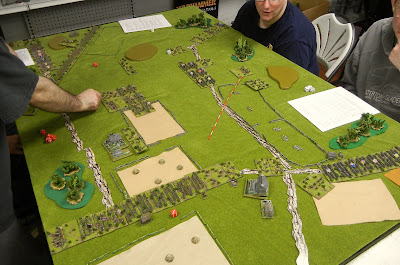 The battle opened on the British right with two columns slamming into one another and then battling to a stall. The British right command lost its general and then hit its break point and I feared the game was over before it started.

But then the British became vengeful, which kept them in the game despite having a pip penalty. Marco played this very well, helped by some pretty good combat rolls. Below, you can see in the distance the British left is slowly developing while the centres remains far apart and trade ineffective cannon fire. 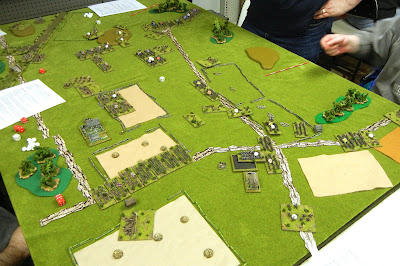 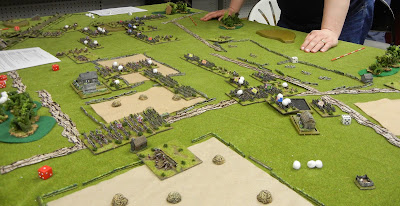 As the game concluded its third hour, we were forced to call it. On the British left, things are very much up in the aim with the Americans past their break point and still struggling to fully deploy. In the centre, the British were about to heave the American left back and lever open a door. But on the British right, further casualties saw the wing start to collapse. If the game has gone on we would have seen a revolving door effect in the foreground with a clockwise spin. 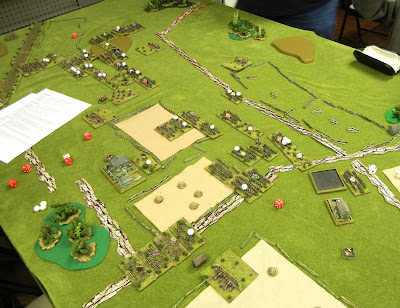 At the end of the game, the Americans had taken one more base of casualties but had bagged a British general so I called it a draw. Another hour would have seen an interesting end game develop. Not bad for a games snagged from a website, boxed up the night before and thrown down!

Up next: A report on a HoTT game and then a general MayDay report. By then I may have some 28mm HYW English done.
at 7:17 PM

Do you have a link to the "Humberside extension" of the rules? I would certainly like to give DBHx a try

I think if you google 'Humberside extension DBA' you get a site called cigars port and something which contains the army lists (which are the only mods necessary). The recoil, mobile generals and morale breakpoint rolls are all mods from the Fanaticus resource page.

Yes, a pretty good mechanic, I think. Fun to struggle with army deployment. Helps to understand when you read about such problems in history to have actually struggled to get you bases of the little bastard into some sort of workable formation.

Nice game mate, happy our little game could bring some fun to you.

Here's the link to the BEST set of free rules anywhere...DBA15-19K

All the Best MrF & Clan
http://mrfarrow2udba1519k.blogspot.com/

MrF--thanks, very helpful link and a nice scenario (really saved my tofacon this year). Yes, a link. Mostly I have been linking to local gamers but I think I can make an exception!