I have a couple of commissions haunting the shelves around my painting station. This is a 15mm Philistine army by Essex. 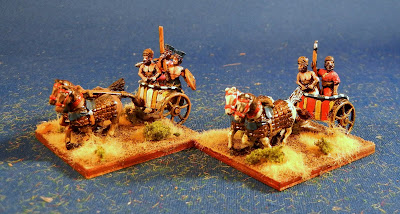 The army has two chariots (perhaps one being a heavy chariot, given there were three riders). These went together very nicely.I decided to go with an arid look to the basing.

There are also six bases of 3Bd. Essex has very tiny bases on their figures. This is visually nice but sometimes poses practical challenges. I ended up using crazy glue accelerated with PVA to get these guys to stay on the paint sticks and the base. 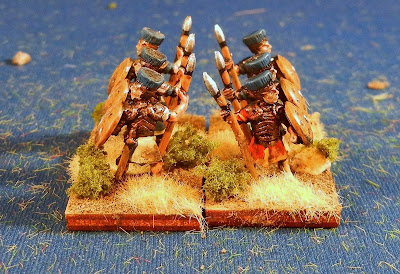 The monopose (which I like) makes the figures look quite uniform. I tried to mix it up by changing the cloth from figure to figure although keeping with the blue theme I'd agreed to with the owner.

There are also two bases of 3Ax. These guys were the trickiest to base as the integral base is about the width of an HB pencil lead. And there were two bases of 2Ps skirmishers below.

Up next: I have both 15mm Early Hebrews and 28mm Norman foot cleaned and read to prime. LIkely I'll get to the Hebrews first to advance this commission to conclusion. I have a buttload of Norman shields to glue on before I can primer.
at 7:23 AM

Very nice paintjob, I do like Essex figures, they always seem to paint up so well.

Nice paintwork. Have you considered blu-tack / mac-tack or hot glue for mounting the figure on the painting sticks? Hot glue sets quickly and blu-tack can be formed around the base to provide a larger gripping areas yet remains easily removable. I use both methods for 6mm strips.

Like many armies, Essex is often the way to go.

Thanks guys. Yes, Essex is nice.

Blutack is an interesting idea but I do like to production line stuff so having four or six identical poses on a stick sure speeds things up!

I found if I stick a bit of thin card on the Essex base that is a bit larger than the metal base and let it dry whilst the figure is laid horizonlally you can then stick the figures to the paint stick (I just use strips of card, resusable) and later the game base.