With club night looming, I decided to give my Freeman's Farm scenario a quick playtest today to shake out a few mechanics.Here is the table. Still some terrain fine tuning (this table is also about 5 inches too narrow) to do but the basic layout is there. 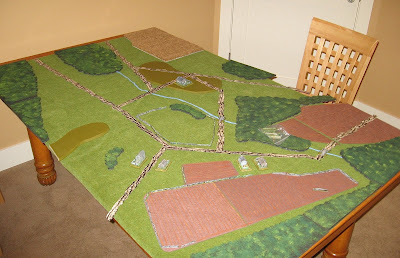 Here is Freeman's Farm. Which MayDay regulars will recognize as bearing a striking similarity to Chew House from last year's Germantown game. 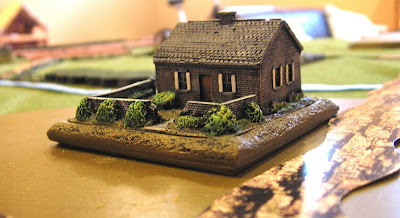 And here is some bad news: two battalions of British grenadiers crashing into a bunch of Rebel state militia. Ouch. 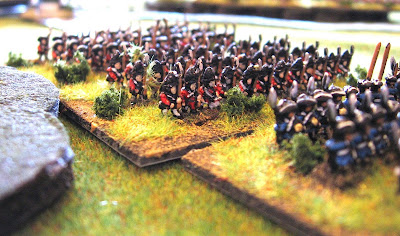 On Tuesday, I popped over to Bruce's to playtest Republic to Empire, the last set of Nap rules for a comparison we submitted to Miniature Wargames this week (probably in the June issue). Not to our tastes, would be a polite way to evaluate it. The QRS was 11x26 inches (both sides) with 42 tables and charts. I pretty much gave up when I had to roll to see if the CnC had stepped out to visit le garcon de le pisse. 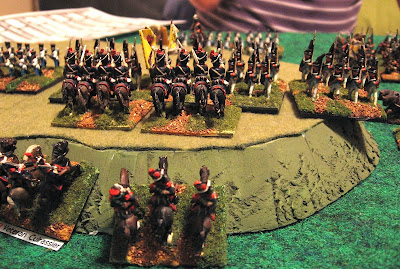 Up next: The 15mm Saracen foot fellows are coming right along. I have most of the main colours blocked in and will be starting to fiddle the trim and weapons this weekend. Painting in batches of 90-odd figures can be slow going! I'm not sure what to do after that. Some more 6mm AWI guys are on the way and at least on unit needs to be painted for MayDay plus all units need flags added. Also need to work out some more AWI scenarios.
at 11:11 AM

I'm reading some naval stories around this period (Richard Bolitho series) and I must admit to be getting more interested in the land battles of the same period. Looking forward to the full battle report!

Thanks. I'm hopeful the combination of map movement and table play (there is a slight bit over overlap) gives the players something interesting to so (as a few surprises) as well as lets the battle unfold as it historically did.