Dave I managed to get in two games of DBA this morning while the girls played. I brought my Romano-Brits by Splintered Light while he fielded an Essex army of Sassanid Persians. A proto-crusade match up. 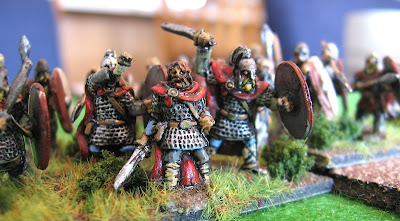 The first game went quickly with Dave rapidly enveloping my right flank and dispatching my cavalry while I rushed forward to blow a hole in his line of various and sundry mounted. He eventually pushed me past the break point. We also retired his black die which rolled 8 one's and 2 two's in the first ten rolls for me.

Game two was a mirror image of the first game. I rushed up with my left flank while slowly advancing in the centre. 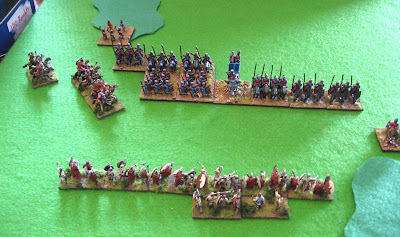 Good luck on the flank allowed me to knock off two of his hordes and bring the centre to bear.

It was three-three at one point but he had some positional disadvantage and low pip rolls which were hard to overcome.

Overall, a fun two hours! And I apparently took hostages at the end as one of his 3Cv bases came home with me.