My plan this weekend was to build some rivers. Alas, it was pointed out to me that I had also agreed to build a new bin for the garbage cans behind the garage. Ergo no rivers, although that is my project this week. In the meantime, I did managed to finish up four units of 1/72-scale Orc and Goblin bow.

These are all models by Caesar. As the number of bow poses in both boxes was low, I thought a mixed unit of orcs and goblins would give the most diversity. 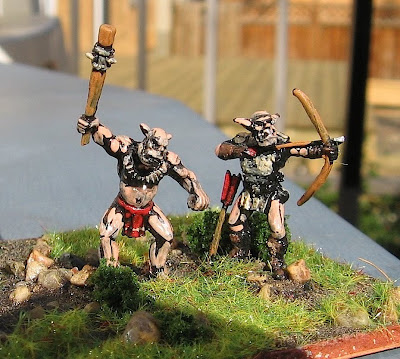 Overall, I'm pretty happy. They painted quickly and have balanced up the "good" heavy forces somewhat. When Mark gets me the boxes of Dark Alliance orcs, then I'll have enough to run a game at the club.

Up next: I have a few heavy elf warriors ready to base and a whack of "good" and "bad" skirmishers that are primered. I also have a 15mm Romano-Brit army primered. We'll see which strikes my fancy when I sit down to paint. There is also the matter of the river; the bases are cut. Next up is the water and banks. I expect this will go very fast. And I should likely turn my mind to the Christmas lights pretty soon.
at 10:44 AM