Bruce wanted to try Lasalle again so he set up a pretty large battle (one of the Waterloo ones that I can never keep straight). British are on the right with one of three divisions on the table. French enter from the left. Objective for French is town on the hill. 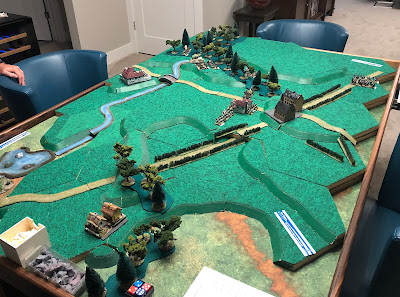 The opening moves saw a huge French deployment followed by the first of British reserves arriving (and having a traffic jam). 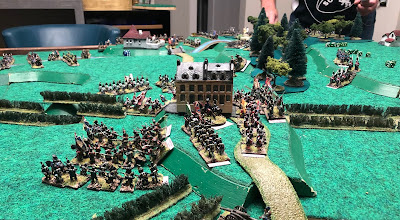 The French side of the board saw an overwhelming attack against a few British forces in the trees (Kampfgruppe Speedbump). 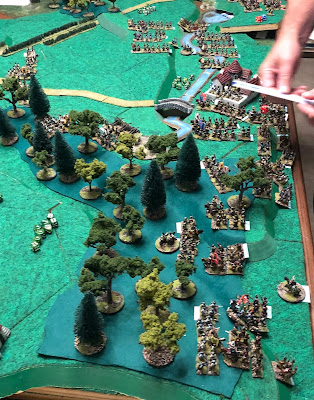 There was a valiant stand by one militia in town that held up the French centre. Alas, their bravery was offset by terrible rolling by the regulars behind them who promptly disintegrated. 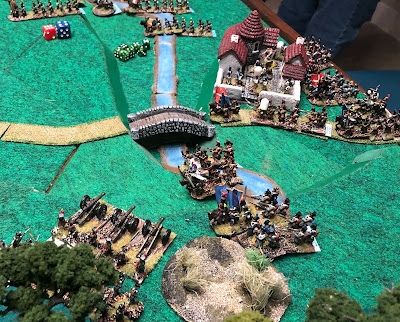 About half way through the evening and the French are rolling pretty good while the British reinforcements are swinging to the left. We started to see some good combined arms in the middle:  British cavalry forcing the French into square follows by British shooting the square to pieces. 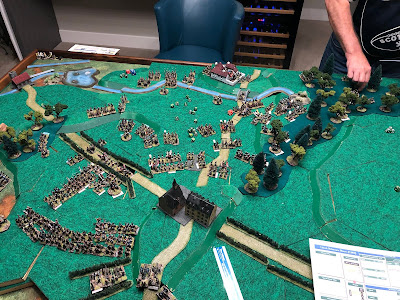 Below is the where we pause the game after 2.5 hours. The British left has worked its way around and is moving through some hedges to try and grab the crest line. The rest of the British are swinging right to hold the town and fend off the French who have finally broken through the wood line. The centre is kind of a mess but basically stalled out. 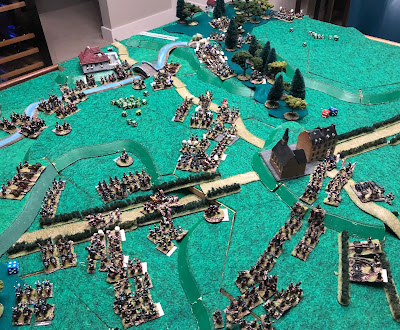 We're going to pick this up again in two weeks. My bet is the French advance to the east-west road in the picture above but run out of time and/or units to take the town.
at 5:00 AM

Nice to see Lasalle being played, it's a solid game.

Yes nice rule set overall just too many squares squashed for my liking :-)

Haven't played enough to sort out random and systemic effects yet.

Yeah, seems to work well. One rule change we added was that units that stay 8BWs from the enemy can double their movement value. Allows for redeployment of reserves on a large table.

Our group in Oklahoma have been playing Lasalle for years. It seems to encompass enough details without bogging down game play. It's been good to see it being played elsewhere.

From the host (Bruce): “How so ? Cavalry fight at 1/2 dice verses squares - that makes 8 dice verses 4 dice AND the cavalry has to score DOUBLE the Hits to have any meaningful effect. If the only score more hits the cavalry bounces and takes a Disorder. Of course squares crumble in the face of enemy combined-arms, but that is how it should be. “