Bruce popped around last week to try out Rebels and Patriots (part of the Lions Rampant series from Osprey). I pulled out my newly rebased War of 1812 troops and pointed out an encounter battle. 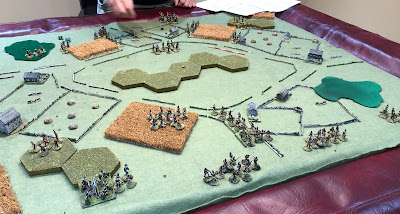 The armies were pretty similar except the Brits had light infantry and cannon while the Yanks had some light cavalry. My Indian Allies are still en route so we didn't have any on the table. Note in the picture below that Bruce is working his cavalry around to the right. 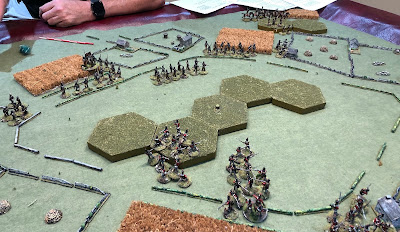 I rushed out to try and gain some early victory points by being the only side with units within 3" of Baby Duck Ridge (specifically the tiny wagon in top of the centre hill hex). Bruce took the time to develop a proper attack. 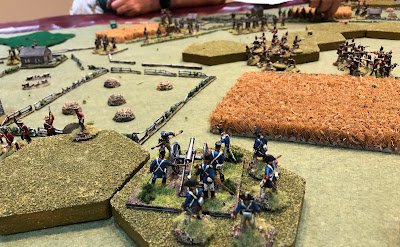 My plan was to sweep the hill with my cannon which worked, to a degree. The rules differ from other Lions Rampant offerings by allowing you to troll for each of your units. I wonder if the game would be more interesting if initiative passed back and forth with each activation failure? 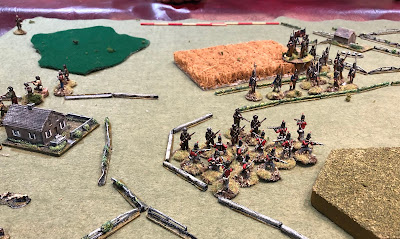 We had some early melees and managed to work out the fighting mechanics. The key mechanic seems to be morale tests at the end of combat which can add disorder (which affect activation and combat). Three disorders and your unit is gone. And, if you roll low enough, you can pick up extra disorder, even while rallying! 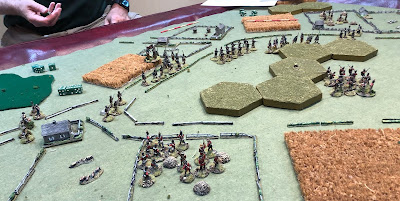 About this point I was sure I was I trouble. The cavalry showed up to turn my flank but had some morale problems when I hit them with a volley and advanced to the rear.

However, Bruce managed to crest the hill in force and start to concentrate fire on my units. My cannon weren't super effective. 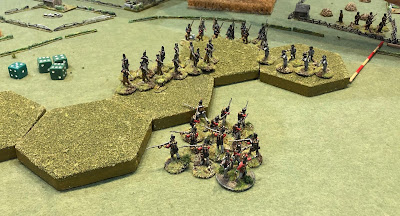 Right after this picture was taken, I had a series of morale failures (terrible, terrible rolls) and half my force routed. We called the game shortly afterwards.

Overall, these rules seemed to work well. There was some chrome (around officers and honour points and snake eyes and box car rolls) that I didn't narrate but that gave the game colour. The mechanics all seem to work and the morale mechanic was very nice. I'm going to try to bring a four-player game out to the club in mid-August.
at 5:00 AM