Guilds of Cadwallon and BSG

We had five guys out at the club this week, braving a nasty cold spell (-30C) to play two games (store and streets were deserted). 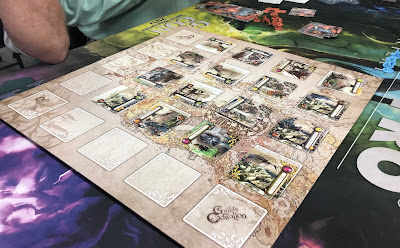 Terry brought out the Guilds of Cadwallon, a worker placement game. I was leery at first (many worker placement board games require too much mental effort for me) but enjoyed myself so much that I forgot to take pictures! I would definitely play again.

Mechanics are basically place workers to capture tiles which have intrinsic point value plus may contribute to your secret mission (more points). We played two rounds--probably needs to be three rounds. To everyone's surprise (including mine), I won. Yay, dumb luck. 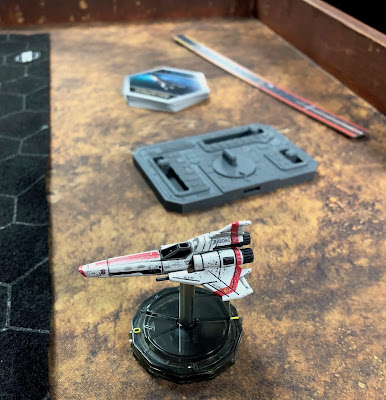 Chen then hosted a game of Battlestar Galactica: Starship Battles. The game looks a lot like X-Wing but I thought the basic mechanics were more akin to Wings of War. We played the base rules (cinematic flight) but the game allows for Newtonian flight (i.e., facing does not equal direction of travel). Above are most of the components you need to play. 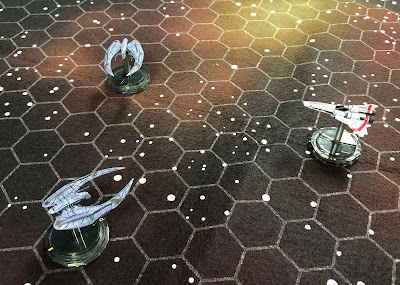 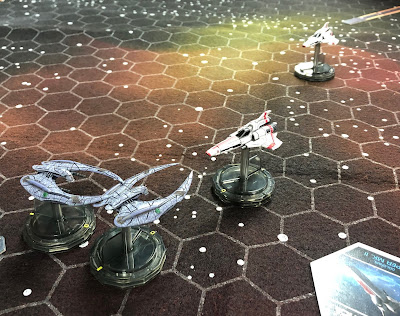 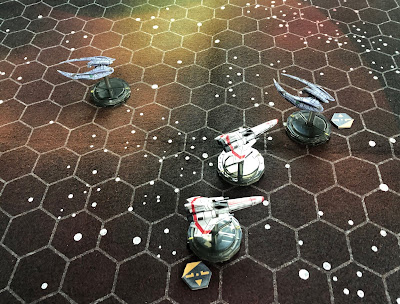 Mechanics are simultaneous plotting by selecting maneuver cards and speed, then movement, then combat. Combat by dice roll (minor mods for range), damage by chit draw.

The maneuver cards are a touch clunky (i.e., too many cards in hand to select among, not enough room on board to place them in the tight dog fights caused by short shooting ranges). But no mechanic is perfect and they do allow for a booster option and G-limits in the basic game and seem to have extra info for the advance flight game. 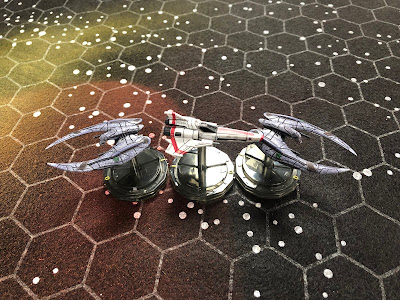 Our game saw the vipers out maneuver the raiders. But the raiders managed to kill a viper and then it became a nasty knife fight (raiders can fly backwards?!!?) followed by the last viper cutting and running (successfully). 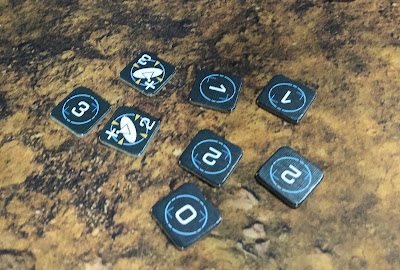 Secret damage chit draws was interesting. I took two hits early on and was suddenly 11/14 damage. Chen took eight (EIGHT!) chits and was 14/16 damage ("DIE ALREADY!"). I don't think Terry took any hits (the Force is strong in this one). I'd try this again to see if the Newtonian flight mechanics are workable.
at 8:37 AM