One of my summer projects is to finish up 10 scenarios and a small booklet adapting Impetus to the AWI. This has stalled out due to distractions but I had Bruce over Sunday afternoon for a test of the Monmouth Courthouse (June 1778) scenario. The basic background is that Washington directs Lee to attack the rearguard of the British army. Lee goes forward with no plan, the British rearguard turns around and routs him. Washington then has to rally the troops. Oh, and it is hotter than hell that day so troops become exhausted quickly. 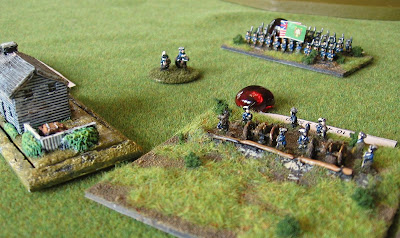 I've tried a couple of different approach to this. I've tried gaming Lee's attack but getting a quasi-historical match-up requires the American player to either act like an idiot or have a crippling set-up (fun, fun!). I've tried gaming the rout, where Washington has to go around and rally each unit while it flees and is pursued--that is more interesting but hard to get right. Finally I've tried picking up the game where Washington has established a defensive line of sorts and both sides feed troops into the battle. Coincidentally, this is the approach take in the British Grenadier scenarios book. 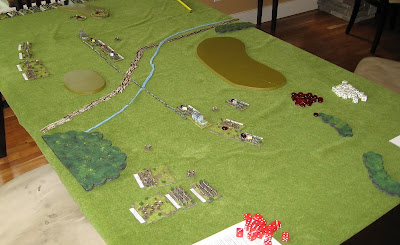 We played out the latter scenario with the Americans started deployed and disordered, far across the board. The British arrive and initially are overpowering, but the reinforcements can very much change the play balance--if the Americans can survive long enough. Bruce played the British and adopted a two-pronged approach with the reinforcements supporting his left wing. He quickly drove in my left wing, which spent the whole game retreating until the met with reinforcements and I managed to break his grenadiers with cannon. 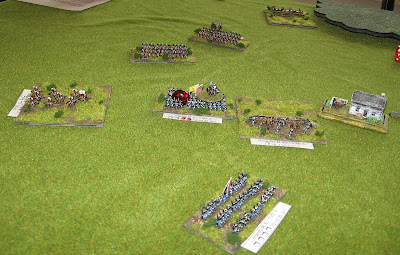 Over on my right flank, the British were overwhelming... except a single militia unit managed to hold up his entire thrust (survive right to the end of the game) and dealt death to anyone who came close. A very dramatic action! 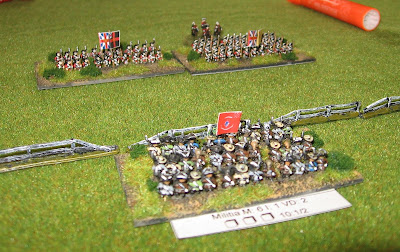 Eventually, though, Bruce's reinforcements arrived and started to push back my crescent defence by flanking it and peeling the line back. We had very asymmetrical rolls this game with Bruce winning almost every initiative roll but having a hard hard in combat whereas my boys clearly had their dander up! 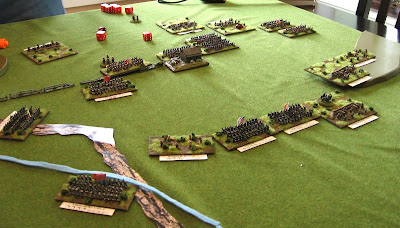 Bruce used this to his advantage, out maneuvering me while I held on hoping to inflict enough casualties for the game to end. Below you can see the end game as Bruce suddenly kills off two units and breaks my morale. Overall, a pretty good game that was tense right down to the line. I would probably have been wise to fall back some more but felt obligated to support my brave militia unit.

I realized at the end we had forgotten to use the "hot day" mechanic which suggests to me that it was not a good mechanic. I will try to cook something up that affected cohesion tests--maybe reducing the cohesion test by one or making it impossible to rally off disorders? It looks to me that replayability is high, with various placement options and different strategies for both sides.

Up next: I'm working away on 15mm Carthaginians (assembled, primed and painting is underway). Need to get some more glue to affix the shields though. And I'm puttering on some 28mm skeletons for HoTT--experimenting with washes over a white primer coat to get a washed out look.
at 9:07 AM

Monmouth is one of my favorite AWI battles. I think Lee gets an unfair shake in most accounts of the battle. Read 'Making of a Scapegoat - Washington and Lee at Monmouth' by Thayer. It tells the story from the less popular viewpoint.

This scenario can play many ways depending on how you handle the arrival times of each army.

In case it's of any help, here are a couple AARs from my Monmouth games played in Volley & Bayonet:

I like the looks of the game. What rules are used? V&B? I noticed little tick marks on the labels, so it looks like some hit reduction system.

Glad to hear about painting Carthaginian! Woo hoo! Let me know when I can send a bag of AWI, as I have a lot...

Thanks guys. This is a playtest of adapting Basic IMpetus (ancients) to the AWI. The boxes on the labels (you can also use dice) track unit strength (which affects combat dice and cohesion tests). I think the basics of the rules are there--gives a fairly good game where one base = one battalion with just enough stickiness that you want to stop and reorder your troops periodically but almost no bookkeeping. I will check out the V&B playtests.

I like reading about the rules from other gaming systems. I'm getting a bit fed up of the games I used to play which didn't take a big enough account of morale which surely must tbe ht emost important element in any battle, along with technological advantages of course.

I'll be back, thanks for sharing,