While I have spent most of my time working through a 15mm Rus army (so many footmen!), I have also been painting some 28mm plastic Romans to finish off my Marian Roman DBA army. Last night I finished three bases of legionnaires and two of psiloi.

The legion look good (or good enough!) and are starting fill out the ranks. Another three bases to go, though. Maybe I'll do some cavalry as a break. Here they are front-and-back. Boy the plastic assembles so much easier than the metal.

And then I did two bases of psiloi. I had thought to use pilum but decided instead to use some slings from the Celtic set for variety. A plausible weapon for skirmishers of the time and an easy conversion given the plentiful arms and weapons. 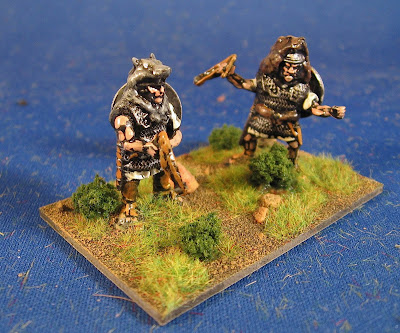 And here they are front-and-back.

Here is the army so far--a couple of stands of mounted and a few more legion and this one is in the bag! Then onto the Celts. I may also do a few more fantastical bases so it could double as a HoTT army. What to use for Roman flyers, behemoths or magicians? Maybe the Boudiccia figure from the celtic chariots could be converted.

For those of you who know him, doesn't the standard bearer look just a tiny bit like Bruce F. from Calgary? 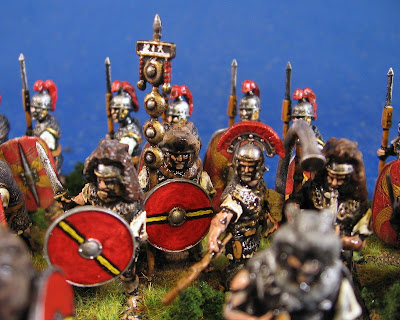 Up next: Well, the Rus obviously! Making good progress just being slowed by the number of figures and my desire to mix up the colours enough on the figures. Maybe by the end of the weekend I will have the painting done and can knock off the basing next week. Then a commission for some Carthaginians. With some 28mm Roman cavalry to mix it up some.
at 12:36 PM