Bruce and I have been playing a fair bit of Rommel lately. Great game. Bruce thought he could bring the rules forward to the Cold War so we tried a Soviet attack into West Germany. Below is the set up with a horde of Soviets facing a small NATO contingent (Canadians as it happens) from about a month back (we've suspended playing since COVID is so bad). 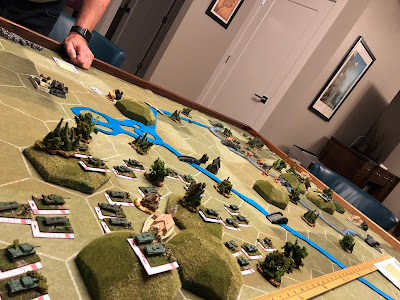 The Soviets had to grab two towns to win. The Canadians had to do 12 stands of damage and prevent the Soviets from getting both towns. Any other results (e.g, two towns gained but more than 12 stands killed) was a draw. 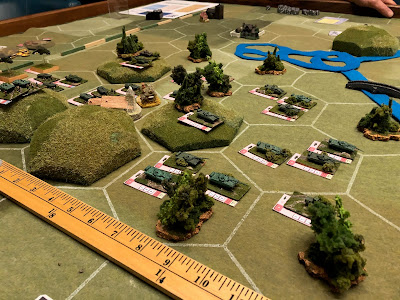 There were a lot (but never quite enough) Soviets. They faced off against a numerically inferior NATO force. 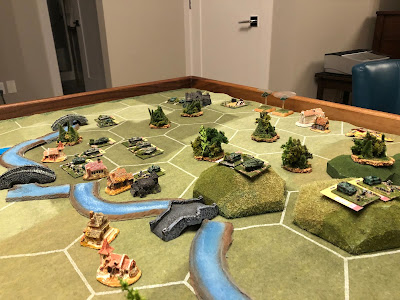 NATO rushed forward to take up some blocking positions. The Soviets road moved up the right side of the board to get across the river unopposed while throwing a left hook out to try and bag the first objective town. 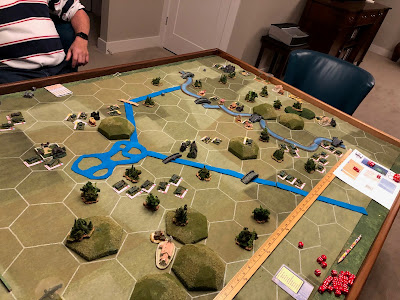 The town was a tough nut to crack even with arty and helos. The advance on the second town got bogged down in bad going while NATO withdrew across the river to make a second stand and run down the clock. 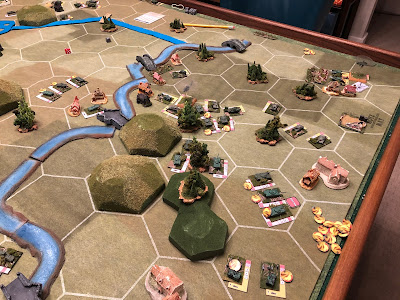 Close quarters mayhem ensued with heavy casualties. The appears of Cobras and Warthogs made things tough for the Soviets (who could not roll worth crap). 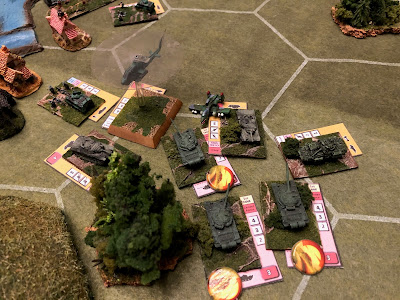 Eventually, though, numbers started to tell and NATO was just overwhelmed by Russkies (albeit badly mauled Russkies). 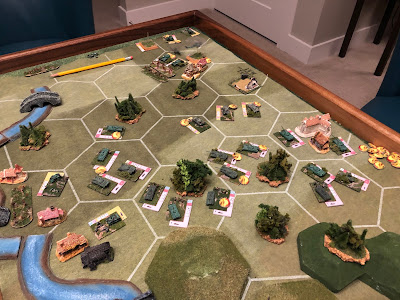 We called the game with the town surrounded but a draw due to Soviet casualties. Overall, a very simple set of add ons for helos and some different national sheets. 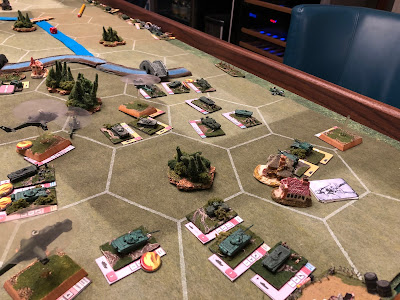 It will be interesting to see what this is like with Arab-Israeli era weaponry.
at 4:00 AM

This is fantastic!
I always thought that Rommel would be ideal for this.
How many changes did you make to the rules?

Looks cool! I have not heard of Rommel (the game, that is!) What is the scale of it - i.e. what does one of those tanks represent?

Is this the scenario from Kenneth Macksey's First Clash?

I've been thinking about miniatures and gaming a lot, but have not played (or even painted!?) anything since August... CVT (and a few others) are keeping me (relatively) sane by joining me for a (remote) role-playing game on Saturday evenings.

(could I have used more parentheses in this post?)

Tim: Thanks! Each base is basically a battalion. Each hex in Rommel represents an area 1km across. I'm not sure where the scenario came from but I suspect it is from the Rommel website or rule book. This is a great operational game, playable with a single quick reference sheet and with lots of very difficult decisions.

Duc: Bruce made a small number of changes. foot print of hexes went up to (I think) 3km to account for TOWs and longer ranges, artillery barrage power went up by 1, he added rules for helos (basically roll to show up, move 4 hexes, can overstock in combat (so four units instead of three) but each use requires escalating roll for them to bot bug out), and he modified the operational cards (some of it just thematic changes as well as adding in airstrike events).

On Tuesday I'll be posting up a report where Bruce marries a map game (derived from Scharnhorst) to create a tabletop game for Rommel WW3 (which Bruce then fought out solo). A few more of those reports will follow, i hope as we can do them by email.

Nice!
Those sound like great changes, and really allow for some epic WW3 clashes.
I'm loving the idea of bringing Scharnhorst up to date too - in line with 1980s maps.
Also - the idea of making each base a battalion rather than company lends itself to boardgames like Tac Air - and copying scenarios wholesale.
PLEASE post more :)