So, with in person gaming on ice, Bruce and I have been doing some internet play. Bruce was keen to modify a map game from Blucher (called Scharnhorst) that creates a table-top battle with interesting context. So he made some changes to mesh with Rommel and we emailed moves back and forth.
This is the opening of the Arab-Israeli War, with the Suez on the north side of the map and Egyptian units in red. We initially deployed four columns each and then maneuvered. Bruce moved Column C to occupy "Chinese Farm" (which was actually Japanese) as we scrambled to both gain victory points and set up a favourable battle. 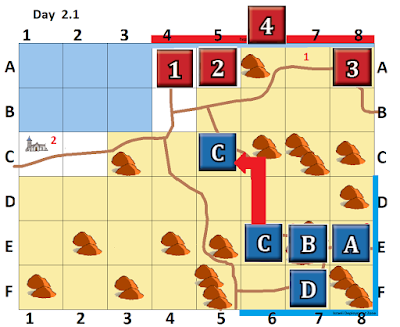 I threw a light Egyptian column (#1) south to grab some victory points, while Bruce advanced column B. At the beginning of any day, either player could declare a battle (the field being 3x2 squares with at least one of his units in the centre column or row). It looked to me like the battle would be at Chinese Farm. 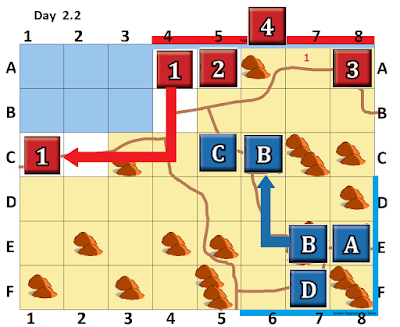 So I advanced Column 2 forward to put one of my larger columns in the battle space. Bruce then moved Column A to enter appear on the table or show up as reinforcements (depending on the eventual orientation of the battle). 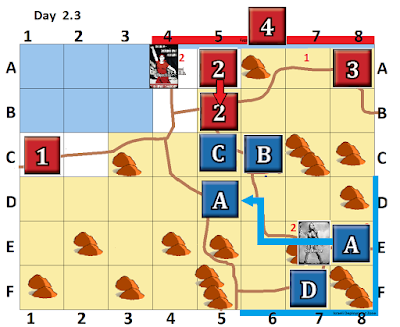 I bright column 3 across to grab some Vs and put my second strong column in the battle. Bruce threw a flanking column (D) up the right side. I then brought column 4 on the table (move not show). 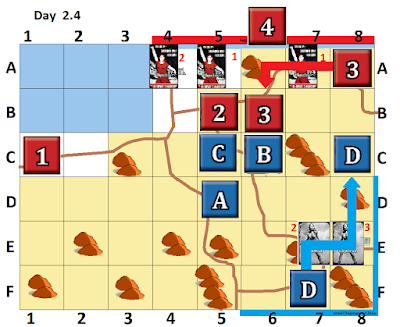 This was the situation at the end of Day 2. Bruce had the initiative and declared the battlefield (see red box below). 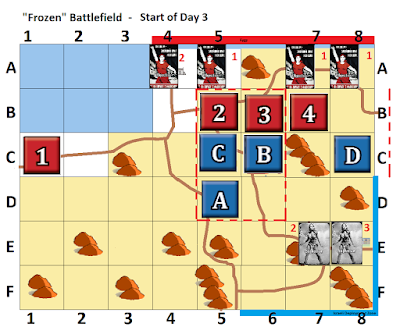 Bruce had me move first so I brought in my flanking column 1 to show up as reinforcements. Bruce then sacrificed bring on his column D to bag some more VPs. I chose to move y column 4 two squares south (not show) to appear as flanking reinforcements. 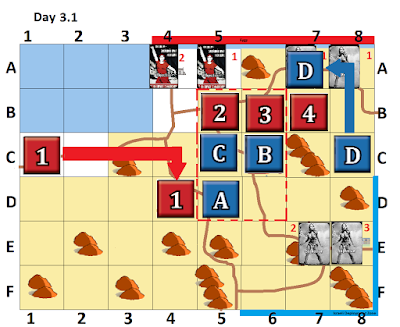 We then use this to set up  game of Rommel WW3 and I gave some basic orders for my troops. Brice played out the resulting game on the table top. His arrive follows. 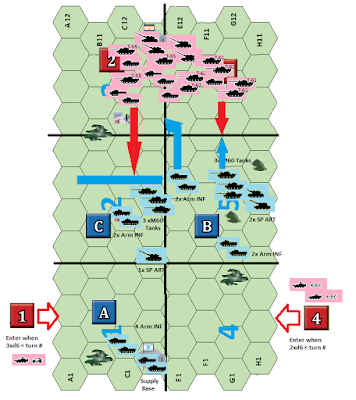 TURN 1 - the Israelis spent 3 OPs dice to entrench the Chinese Farm (C6) and the area around their Supply Base (D1). As per the Israeli plan the right flank advanced BUT did not assault the Egyptians. I didn't want to be caught with repulsed, disorganized Armoured column and no OPs dice.

TURN 2 - The Egyptians played their favourite Event - Wave Assault and advanced and entered combat all across the front. They came within one HIT of destroying a whole Armoured column in hex G9. But elsewhere the Egyptians were repulsed with the Israelis taking variable amounts of casualties. Most notably, NO Israeli casualties a the Chinese Farm (C6) 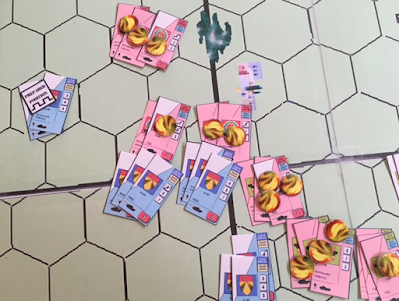 TURN 3 - The Israelis attacked hexes D7 and D8 with all they had: armour, artillery and THREE Airstrikes. On the second Tactical-Move they achieved a Breakthrough and spread out to threaten the Egyptian Supply Base. This was a mistake. 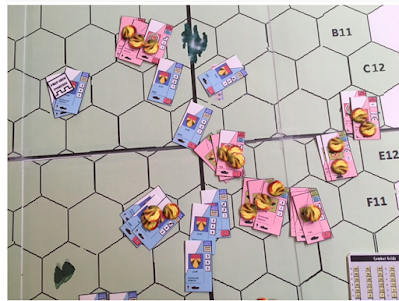 TURN 4 - the Egyptians launched a counter-attack. A pincer flank-attack on the spread out Israeli columns and achieve a breakthrough to eliminate the Israeli SP Artillery in hex D4 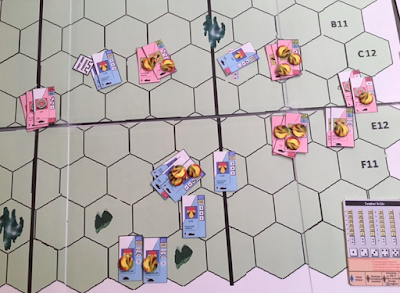 TURN 5 - with few fresh troops, the Armoured Infantry within the Chinese Farm emerged to attack the depleted Egyptian columns. At the same time, the Paratroopers who had been held in the rear to protect the Supply Base moved on the Egyptian column who had penetrated the deepest .

TURN 6 With little strength left the Egyptians launch a "forlorn hope" assault. The Chinese Farm (C6 & D8) were attacked. The Defending units in D8 withdrew and the Armoured Infantry within the Chinese Farm held, resolutely. As reinforcements two BMP-TOWs arrived on the south-eastern corner of the battlefield. 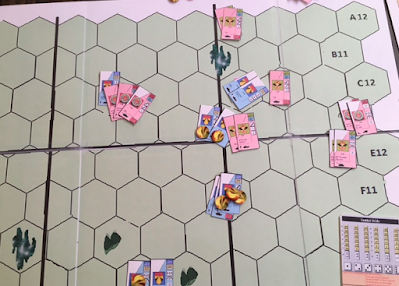 As a note, it looks like some recce units arrived as reinforcements but the rest of column 4 did not. Not sure that would have mattered.


TURN 7 - The Israelis took the opportunity to claim a "Re-set" and removed the spent OPs dice from their OPs File. With only three OPs dice in their OPs file, the Paratroopers advanced on the BMP-TOWs, while further north the armoured columns wipped out the remnants of the main Egyptian force. At hex C11 the Israelis achieved a breakthrough and could have advanced on the Egyptian artillery and Supply Base save for the lack of OPs dice. 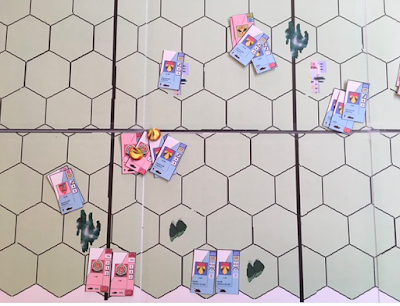 With only BMP-TOWs and Artillery left. (12 strength points in total) the Egyptian commander called for a cease-fire.

You wanted a battle of attrition, Bob and you got it ! WOW was it bloody. I think it was a combination of the enhanced modern Artillery (CVs 6, instead of 4 or 5) and the lack of terrain. All that Open terrain in the desert makes a difference. In the end, I think the Israeli quality triumphed over the Egyptian quantity. Having the Armour advantage ALL THE TIME MEANS the Egyptian armour takes an extra HIT on every combat - win or lose ! There were times when the Egyptians rolled well, in combat, but still took unacceptable tank casualties. Eventually, they just ran out of Armour.

The map game was interesting but would have benefitted from a more complex road grid and less clear victory objectives so we're going to try that again with a Cold War gone hot map game in central Germany.
at 4:00 AM

Superb stuff- did not disappoint. Great ideas here.
As you say that map game would lend itself perfectly to the Fulda Gap.
Have you put this on the Rommel facebook page so that Sam can see?
I think there are some great ideas here to mine for modern stuff...and the scale suits admirablt for masses of WarPac / Sov Era tanks.

Bruce has great ideas! I have left this to him to share and we'll have a Germany 1985 scenario up next week.