Taylor invited me over for some holiday gaming and offered to put on a game of 15mm Crossfire. He modified the rules to include a card driven activation mechanic (when both sides have lost the initiative, you draw a card to restart the initiative sequence) and he'd tone down machine guns. 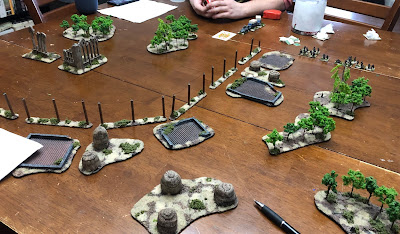 This scenario saw three Polish platoons deploy hidden while two German platoons entered. The Germans needed to find and neutralize the (also hidden) Polish bunker before the German convoy came down the road (after the third time the joker was drawn). 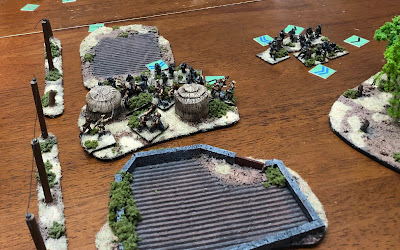 The Germans came on board, got shot up, had an amazing series of rallies (I was facing the dreaded the von Hollywood Regiment, it seems), and then close assaulted and creamed the first Polish platoon. They then tried to cross the road and walked into withering fire as the second and third Polish platoon unmasked. 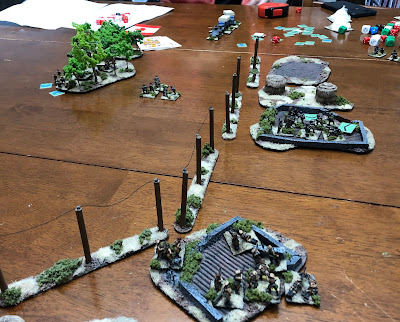 The fire fight stagnated after one German and most of one Polish platoon were eliminated. Two German assaults were also pushed back. Then the German convoy showed up (with the Polish Bunker still hidden). 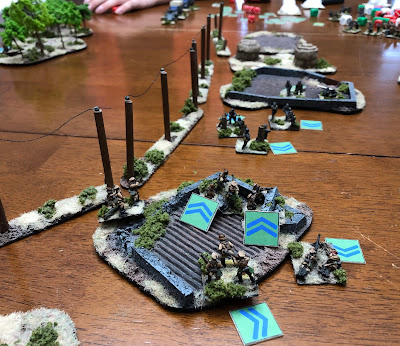 Soon enough the bunker unmasked and started shooting. Alas, it could not hit anything for round after round while the infantry fire-fight got rather desperate. Finally, the gunners in the bunker got the range and in one turn lit up the two trucks and the armoured car.

Overall, a fun game with the rule tweaks Taylor has made!
at 5:00 AM