Finished today are some of the baddies from the Heart of the Empire expansion to Imperial Assault.

First up are four figures (two sentry droids and two storm troopers in riot gear) on the simple "indoor" bases that we'd agreed to. 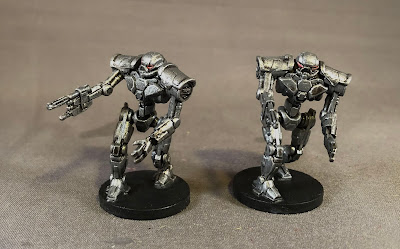 The droids are menacing look ( a touch Terminator...). I'm sad the highlighting I did was so muted by the wash. Oh well. 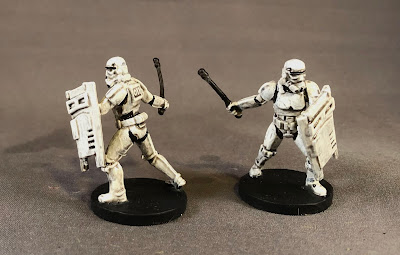 The idea of storm troopers in riot gear is an odd one. Nice figures but I'm wondering about the Empire's interest in non-lethal crowd control? Maybe these guys washed out of the Stormtrooper  marksmanship class? 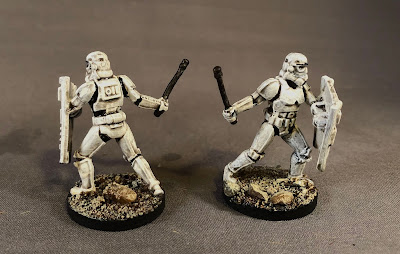 There are four of these guys: two on indoor bases and two on rubble bases (bah-dum-bump).

I have a few more of the baddies from this expansion to finish up (including a walker, some more droids, and some shapeshifters) before moving onto the next one.
at 5:00 AM

These look great! I'm glad I'm not the only madman that's painting his Imperial Assault figures!

These are part of a commission I'm doing. some basic painting really improves the figures. They are super nice and I'd be into this if I didn't already have a big 25mm Star Wars army.

Thanks. They are nice sculpts and a good pose.