I dropped over to Bruce's on Tuesday in the hopes of reversing my string of ACW losses. Bruce set up a nice game of Longstreet, with the Southerners on the attack. 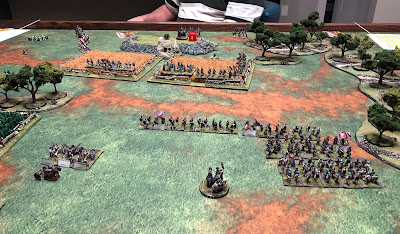 Key things tonote in the photo above is the victory marker located just behind the right-most field as well as Bruce's refused right flank (top left of picture). My plan was to hit the right side hard, push him back and grab the objective marker, betting that I would have enough points to win the game.

So I advanced, we traded fire and (on the left) you can see Bruce hurrying his cavalry around into position. I roughly calculated he would not make it in time, but he had a couple of good cards that accelerate his progress.

Above, the lines have connected and Bruce is about to take a pounding. So far, so good. 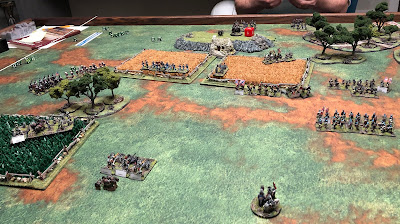 Then Bruce played a couple of good cards that stalled my advance while his cavalry surged forward. At one point I had to discard 1d6 of cards and, of course, I rolled a 6, thereby forfeiting my turn (no cards). Arrrrgh! 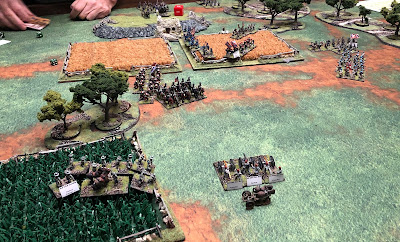 That left me as per above and his cavalry (below) rode down my cannon. The cannon beat off the attack (with great dice--he got spanked) but the damage the cannon took pushed me over the threshold and Bruce won a convincing victory. A great save by Bruce. 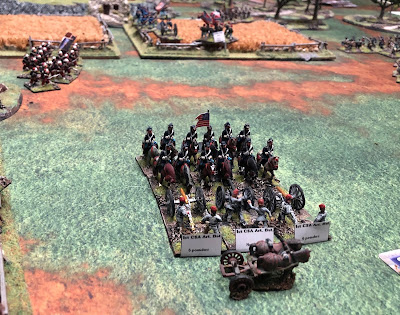 I remain winless at Longstreet in a long while but hope for another chance for victory.
at 5:00 AM