Bruce hosted me on Tuesday in game of Fate of Battle: Look Sarge, No Charts! Napoleon's (whew!) by Buck Surdu (and someone else whose name escapes me). I'm sure we've played this system once before. The crux is that there are no charts, just rosters and some custom dice (which Bruce converted back into a chart because it is easier to deal with...). 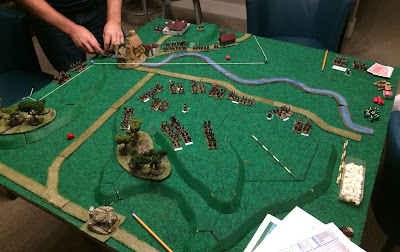 The French set up on the hill (bottom centre) and their objective was to last 12 turns. The Russians set up on top left (white string denoted boundary) but then also had reinforcements appearing on the left and top right during the game. Bruce managed to stick himself good with a push tack at the beginning of the game (looked bad!) but bravely soldiered on. 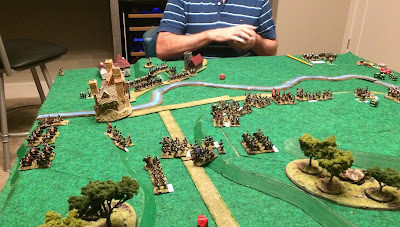 Activation is card driven and turns end randomly so not every brigade gets to move every turn (although likely they get at least one move). My "plan" was to spoil Bruce's cavalry attack so I surged left off the hill. This was a so-so strategy, salvaged by good dice rolling. Meh, first time out with these rules so a guy is gonna make some mistakes. 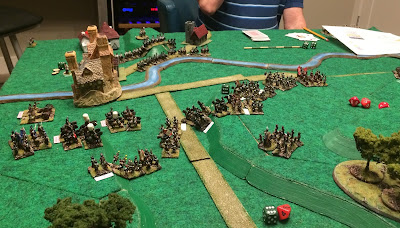 In the end, I owned the hill and turn to face Bruce's main force (eventually bagging his cannon, but it took forever!). He then moved across the river at me and my infantry went into square. The problem with that strategy was that his reinforcements started to arrive behind me. 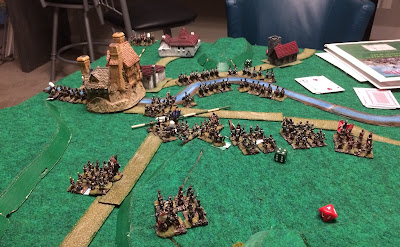 The first group were cossack horse whom I dispatched with more lucky dice. 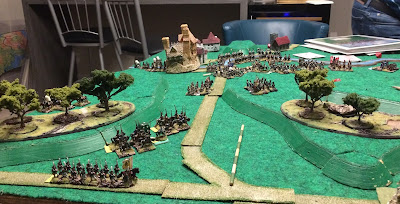 But they then gave way to infantry which crashed into my squares. This kind of pin-and-wail strategy was pretty effective except for... more lucky dice. Without them, I was hosed at this point. 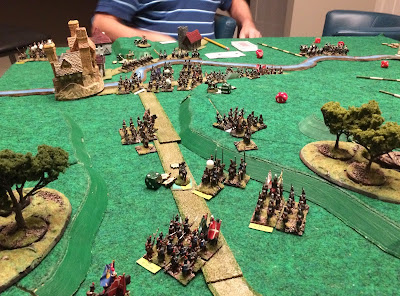 Things were heating up in near the river and Bruce had routed my weaker command. His horse were working their way around my flanks (out of picture below on right). But square is pretty tough against cavalry. 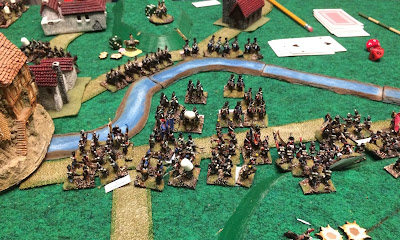 Fortunately, I managed to rout his infantry who were creeping over the hill. He could have recovered them but likely without enough time to get back in the game. So we called it as a lucky win for the French (who were "rewarded" by being allowed to continue their retreat from Moscow...). 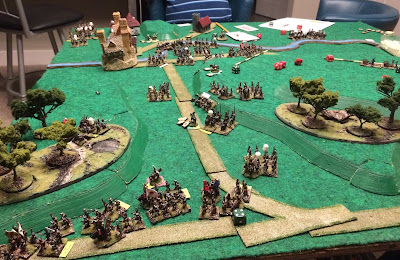 Pretty slick rules (much like Surdu's PT boat rules that Justin has). Your focus is at the command level, the mechanics are easy to remember and use. There is enough grit when closing to melee that the game feels like Napoleonics. But there is none of the turgidity that most Napoleonic rules seem to contain. I'd play again! Which is good because Bruce is (gasp!) rebasing.
at 12:41 PM