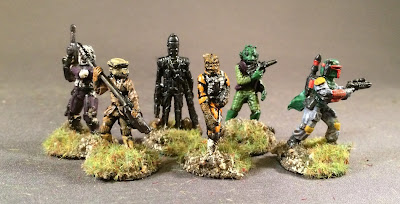 I think these guys would do for a good pulp alley game one day. Maybe crossed with Star Trek so as to outrage my club mates?
at 5:00 AM

Sooo.... your working on Trek figures next then to have both bands ready to rock? We could always do a Storm Trooper vs Red Shirts & have everyone die! Are these figures more in line with 25mm? vs what the Imperial Assault ones are, or the Wizkids?

I used to love this stuff when it first came out but could never afford it. Then I found about 30 stormtroopers at a bring and buy. They are still gathering dust twenty years later. I take them out evey now and again and dream of the days when 25mm was king.

Could probably find a digital copy of the old West End Games Star Wars miniatures battles around. I may even have one...

These are old school 25s so notably shorter than modern stuff.

Oh yeah, prices were crazy. I got almost all of these in a bring a buy except Boba Fett (someone on TMP sent me him to fill out the Bounty Hunters).

I was thinking Pulp Alley. Or maybe Dragon Rampant for more figures. Not sure 30-year-old rules are worth the effort I used to own a copy of the WEG rules but seem to have passed it on at some point.

If you do play a crossover game, please post a blog, then step back and watch the Interweb explode!

Seriously though, do let us know if you do play a crossover game. I've seen starship combat crossovers on the Starship Combat News forums, so why not skirmish games?

Its your table! Have fun, and never mind canon! :)

I have quite a number of 25mm figures (Star Trek, Star Wars and am awaiting an order for other TV shows) so I will keep you posted! My Xmas game will be a cross over but not using these figures.