I dropped by Bruce's fog-shrouded house last night (the roads home were crazy!) to give Black Powder a playtest. This was part three of our four-part effort to work through the new tactical level sets of Napoleonic rules. 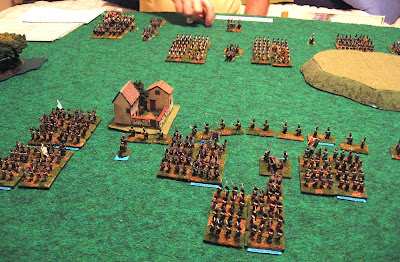 Overall, these played much like Warmaster, but with many of the problems fixed. The rules were easy enough to learn and contact was made almost immediately so all the mechanics were in play by about turn three. 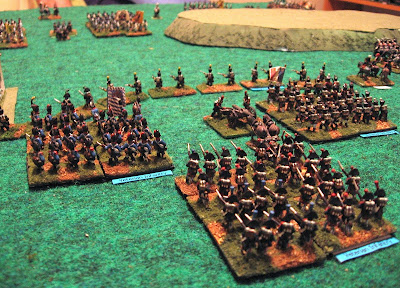 The command system is streamlined (one roll per unit or group per turn, but multiple orders are possible). Base removal has been dropped from combat which solved a multitude of issues and cleans up the mechanics. Dice still determine to some degree where the focus of your attack will be, though. In our game, Bruce had terrible command rolls (thank goodness) and missed winning the game twice because his units bogged down.

There is a fairly good relationships between foot, horse and artillery which allows historical tactics. Here's a tip, don't ride your horse in front of a cannon. There were also a couple of nice places where the game modeled things (e.g., advantage of charging in attack column) without any real mechanics at all--that is to say, the meta-design created natural and historical advantages in gameplay. 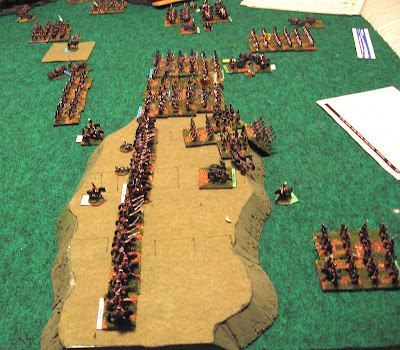 There was also some nice grit to the game, albeit through the relatively clumsy mechanic of special rules. Not sure how to work around that and cover 200 years of combat, mind you. 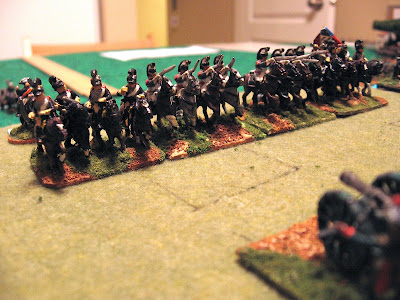 Not quite as good as LaSalle but still a good game.

Up next: Still working on some 15mm Saracen cavalry (whew!) and rebasing more 6mm fellows. Somehow I lost a 6mm cannon in the carpet. That is going to an unpleasant discovery with my foot.
at 6:50 AM

Nice review. My friend john picked it up and lent it to me for a brief look over. I have to admit I mostly just looked at the pictures. I hate reading rules, especially when I'm already playing a game I'm happy enough with. I looked at the rules long enough to determine they were "warmasterish"...

How is it different from Two for Tea?

Better than Tea for Two. Command mechanics are slicker, no base removal (which is a dumb idea in the end), better thought through combat resolution with a break test.

Not as good as DBHx, but aimed at a different level (battalions). Still feels like GW with the inelegant "hit-save-effect" triple roll for combat outcomes with handfuls of d6s. Not my thing. LaSalle is better still. But definitely better than Tea for Two.

Maybe I'm daft but I'm not quite sure what you mean by "no base removal"...? You don't have to re-base your figures to play the game....? Stands are not removed until the whole unit goes...?

Is there a lot of sitting dice on the table to denote hits taken and that sort of thing?

In Warmaster and its variants, when a unit of three bases takes X hits, one of the bases comes off. This does not happen in Black Powder. Instead disruption is tracked on the unit (using dice or chits or puffs).

Leaving all of the bases on the table prevents a host of problems caused by stand removal related to frontage changes, brigade command rules, and a stepped reduction in combat power that is unrealistic.

There would be no need to rebase figures; units comprise 4-6 bases of whatever common base size you use.

So how does it compare to LaSalle in complexity and/or playability? Which one led to more rules look-ups and head scratches?

LaSalle is better because there are fewer mechanics. More of the play is in the meta-design of the game rather than requiring specific mechanics.

Both are about the same in terms of complexity. Neither required any real rule looking and we had it figured in about 2 turns for both games; the quick reference sheets were adequate in both cases.

Black Powder has better command roll rules than Warmaster but the dice still determine where you attack and where you are stuck. If you like that, then you'll like BP. Combat in BP is a bit GW with more rolls than really necessary to resolve any one combat.

Where BP perhaps shines is that it covers 200 years by using special rules for units while LaSalle is (presently) only about Naps. There is likely also more texture to the units in BP because of the special rules. I don't like special powers (very GW) but I see the utility here.

Probably a matter of preference here moreso than a clear winner.