I knocked off another two bases of Romans this week amid working on some 15mm Anglo-Irish. Below you can see 1/4 of the basic Marian Roman I'm working on.

The command stand proved the trickiest and I'm ultimately unhappy with the poses I put together. But done is done and I think the painting worked out okay on the faces. I think (fingers crossed) that those in the command party used round shields, not the big scutum-type. 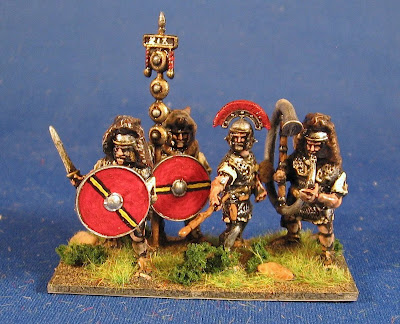 I also did a stand of Legion with pilum. I was trying to recreate the overlapped shield effect. 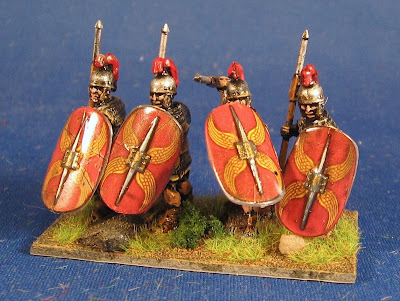 I'm fairly happy with how these guys turned out. 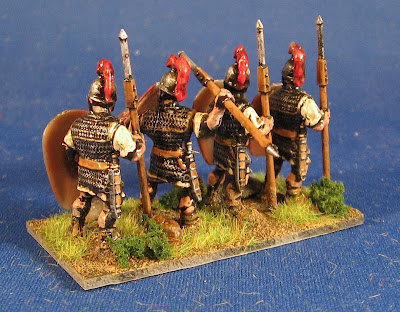 I think this is the most attractive angle, showing off the crisp pilum. 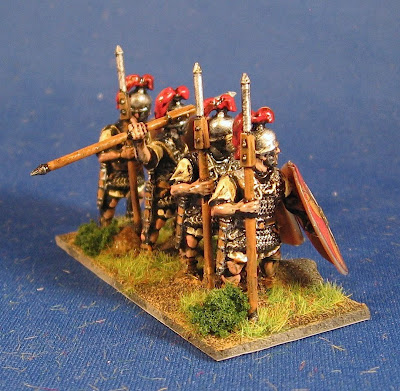 Up next: 15mm Anglo-Irish are about 60% complete so that is likely the focus. I might also crack open the Wargames Factory chariots Mark sold me on Tuesday.
at 5:25 PM

These are fantastic. I particularly like the pilum stand. You've really captured the look well.

Thank you! Yes, I'm quite enjoying this and it makes me want to do a better job than on figures where I'm just happy they are done! Finally plastic modeling that does involve assembling a 210-piece bogey-assembly only to hide it with some skirting.

I spent some of last night finishing up some oft he painting on a 15mm Anglo-Irish army and will hopefully base that this weekend.

These are great Romans! Almost make me regret basing mine individually... just a bit.