We had 13 guys out to the club last night and three games ran. Dave hosted Justin, Mark and Bruce in a game of Blitzkreig Commander. 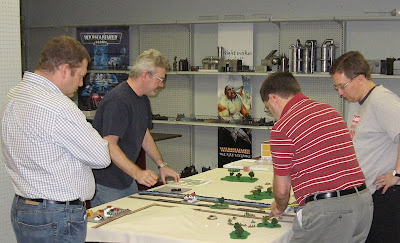 An all-infantry game, this was eventually declared an Axis victory. Here an ME109 does a barrel roll in victory. 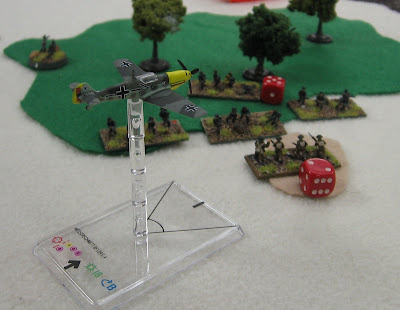 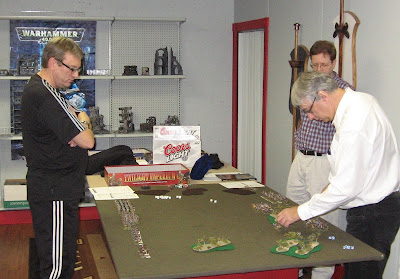 This looked like a Roman victory after the Gaulish cavalry was unable to turn the Legion flanks. 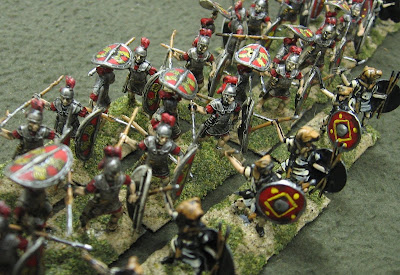 And I hosted Kevin, Scott, Chris and Chen in a game of LotR Basic Impetus. 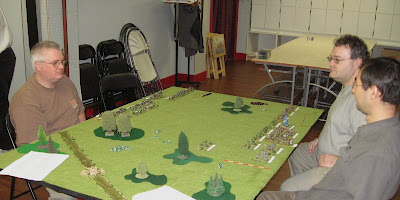 The forces of evil were arrayed including these lovely Caesar goblins.

The magic was abstract, the potentially most important being the ability of good to bring on up to two units during the game. They chose to hold their horse off board to get the best match up but then committed them piecemeal. The lines clash below with a fairly good match-up for evil. 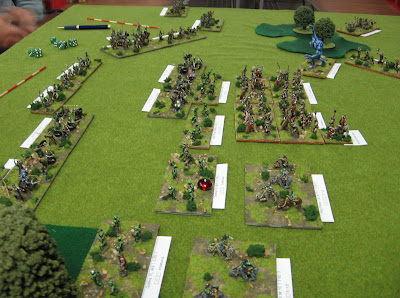 After taking a kicking in the first part of the game, evil started to rock and both sides were within one VD of their breakpoint after about an hour of play. Below we see the troll, having cleaned up a couple of units, getting shot in the ass by some Rohan bow. 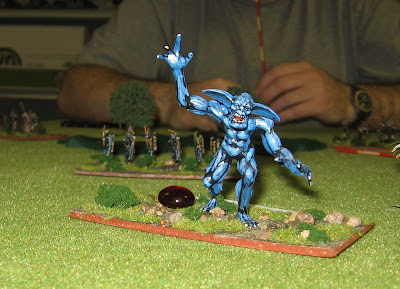 In the end, the evil side broke first while good was closest to holding the ford. Again the warg riders prove to be fairly useless! 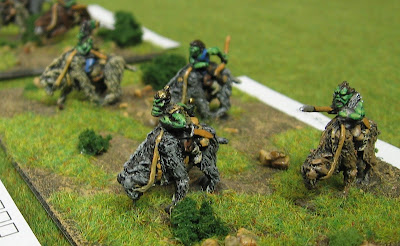 Next time I will bring out a double-sized game and try the reinforcement mechanics.

Up next: Some 15mm elves are just about to roll off the production line for a trade I'm working on. They look nice. Then I'll get to work on some 1/72 reinforcements for the December 1 club night an some 15mm Brits (did they flesh on them the other day).
at 7:28 AM

No sweat; it was fun to watch. Interesting how abstracting the magic makes the game run very smoothly versus my GW experiences where something happens and the basic mechanics get interrupted with I'm going to use a might point. "What does that do?" Well, you can modify a roll? "A to hit roll or a save roll?" I don't remember, let me look it up. "What if I cast a spell of gameyness on your horse? Can you complete the charge then?" I know some guys love that, but I much prefer embedding the magic in the pre-game phase (a la Peter Pig) and then modifying the mechanics rather than using special rules. Different approaches for different guys, I suppose. But there is much less opportunity for abuse and rules lawyering. The trade off seems to be some loss of Lord of the Rings atmosphere.

The Fantasy game looks great. Did you make the red/white measuring sticks? They look nicer than the old tape-measure!!

Yes, they are wooden BBQ skewers with 1" lengths of red (used 1" painting tape to make edges). Way easier to used than a tape because of the contrast.