I popped over to Dave's on the weekend to give the Lord of the Rings adaptation of Basic Impetus another test before Tuesday's club night. We fiddled a few rules to make it more magical and otherwise played a straight meeting engagement. 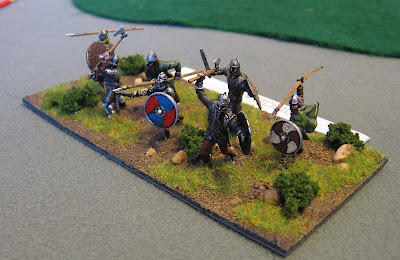 Overall, a clean game. Dave beat the hell out of me, using better tactics and some sort of dice voodoo. 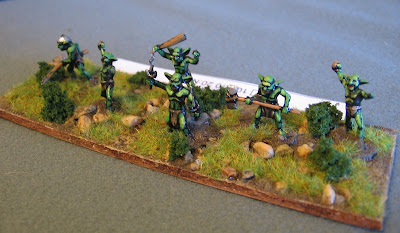 We then fiddled the magic a bit more for Tuesday's game. There is certainly a role for magic in the game but mostly by altering unit stats and rolls, not as a separate set of mechanics. 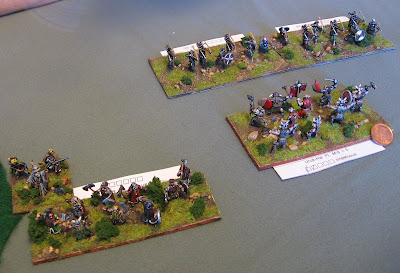 Then Dave went into the basement and gave me back a bunch of medieval stuff I once gave him plus some other odds and ends so I have the core of Gondor army. 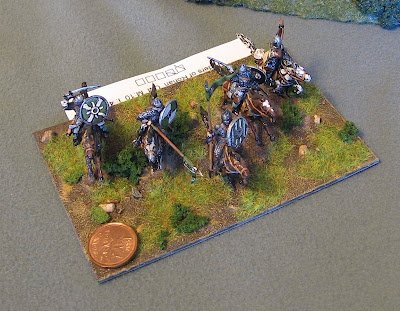 Up next: Some 15mm Rus (I promise). The painting bench is crowded with 15mm guys ready to get painted: Romans, Celts and Elves to be specific. Then some more 1/72s. Currently cleaning up a box MiniArt's German warriors. You know you'd think a manufacturer would check to see if the riders actually fit on the horses before issuing the set (these need 40% of their legs carved out to sit properly). What the hell? Also lots of mold-line flash. Nice figures but poorly produced.
at 1:56 PM

Great looking figures Bob. Your basing is very nice - you should write a tutorial!