I couldn't make the club this week due to my daughter's curling schedule. But I did finish some terrain.

The rock pile on the right is from a Matchbox 1/76 kit, I think. But the rest of the loading dock was one of several pieces of 3-D terrain I purchased on eBay last year. It assembled nicely enough but there was a slight warping to the deck that I could not fix (see picture below on the left). 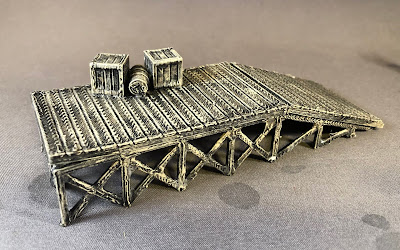 It painted up okay and was a lot cheaper than a commercial plastic HO-scale dock would have been. I also bought a fast-food eatery. This was basically a snap-tite kit with the walls sliding into one another with grooves. The tolerances were amazing but I could not get the side walls fit until I reversed them (hence the weird checkered pattern). 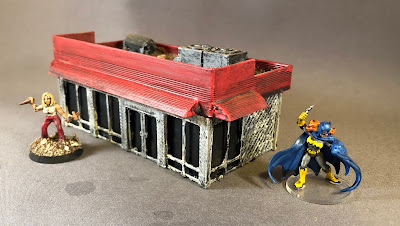 The roof plate was bent and curled up at about 30 degrees. I managed to straighten it with some aggressive counter-bending (figured I would just use card if it snapped). I then glued it down. The 3-D windows were garbage so I used plastic card. The model needs a restaurant sign on the roof. 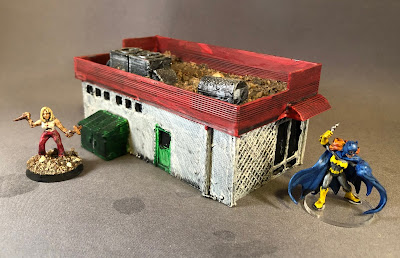 Overall, it was a nice enough model. I think I paid $12? So probably half or a third of a commercial HO kit. The quality was so-so and the building challenges of the resin make me think commercial plastic kits are worth the extra money.
at 5:00 AM

Thanks. yeah it looks fine on the table.