Bruce and I gave Fields of Despair a second play this week now that we have worked out the rules and mechanics some. We turned back the clock to the very start of the war and the Germans had to push through Belgium. 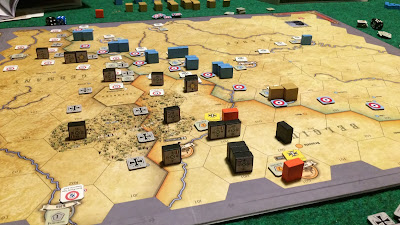 This went well, with Liege falling quickly. I then moved towards the west as fast as I could to take advantage of the Allies lack of preparation. 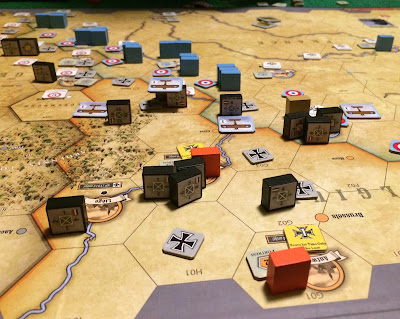 Bruce sought to distract me in the south with a counter offensive. Despite that, things were going well ... .

...until I decided to divert resources to capture the channel ports (thinking about my right flank). In retrospect, these resources should have been sent towards Paris.

As a result, this was basically as far as I got (not quite historical) before we ran out of time (and the resource points started to tip things towards the Allies.

Overall, some nice mechanics (especially around airplane, artillery and technological advances). We did more bluffing with dummy blocks this game and, overall, we played better. I still don't quite have a handle on the naval war mechanics in terms of an optimal strategy. And Verdun is still a beast of a fortification.