In late October, I attended the model railway swap-meet that happens twice a year. There is a lot of rolling stock here but I was specifically interested in picking up a few extra buildings (ideally built and at a discount) for Gotham.

Two fellows sold me six buildings for $45 (built, significant discount). I was very happy to get a police station and a fire hall. I was also hoping for a church, a bank and city hall, but no joy. There was a cool rooming house, however. When I got home, I noticed that the one on the back right is actually N scale (the rest are HO). I would think, by replacing the doors, I could make it work as a low warehouse. The water tower is cool. 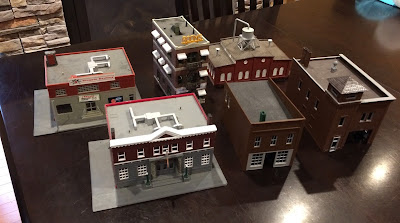 I did some minor repair work on the buildings and then sprayed them all black. Why is it that so many railroaders don't bother to paint their buildings? None of these had any paint--just a few decals 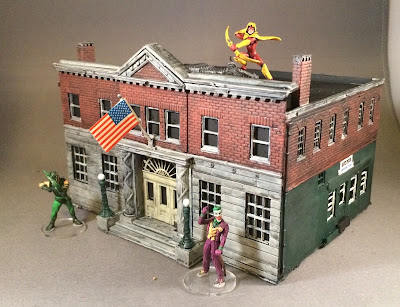 The police station turned out okay, I think. There was a bail-bond place around the back (which made me laugh) but I didn't have a bail-bond decal. I did have a guns and ammo decal. That seemed more appropriate for Gotham, anyhow. I think the metal grill on the back windows is a nice touch. Also, cool HVac arrangement on the roof. 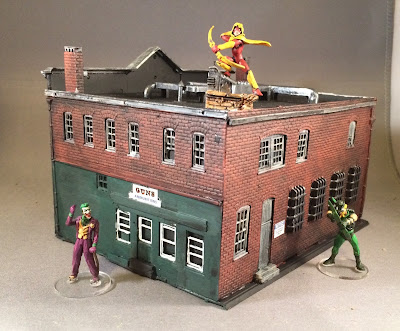 There was also a generic building. I had to replace the door with some card. I figured a bar would be a good addition to my buildings so I decaled it as such.  Added a few of the painted adverts (from an old model train decal set) that I often see on the old warehouses downtown. 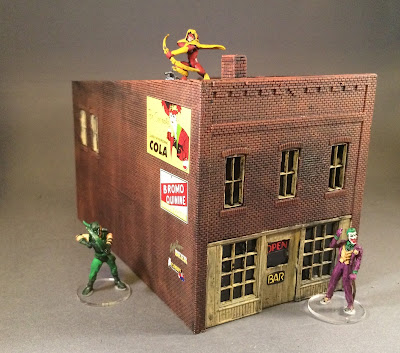 Just as I was finishing up the building, I somehow got a huge painty finger print on the other side (arse!). This totally pooched the dry brushing on the brick pattern. Rather than start over, I recalled Terry had some graffiti on one of his buildings. So I blacked out the print, then made up some graffiti. I think graffiti-ing "graffiti" is meta. 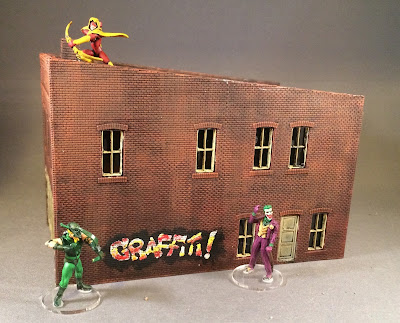 Terry also turned me on to some Xmas walls at Michael's. I bought five sets (maybe 4 feet of wall for $24). I decided to paint them (original colour was cream, which was also fine). I sprayed grey, blocked the brick, drybrushed, detailed ,and washed two sections as a test. I think this is good enough and now will go back and replicate on the other (sigh...) 14 sections.

I'm not totally sold on the balusters. Even accounting for the different scale they are intended for, they look a bit wrong. But good enough for ornamental walls for the price.

Up next: Probably some more buildings then I should get back to some 54mm AWI figures.
at 5:00 AM