Congo at the club

Bruce hosted another game of Congo at the club last night. Each player came in from a separate corner. Winner was the person with the most victory points at the end. Victory points could be gained (at least on my briefing sheet) for killing units, digging up the treasure hidden in the village in the middle, killing the guardians of the treasure, and spiriting the treasure off the board (exit point determined by game play). 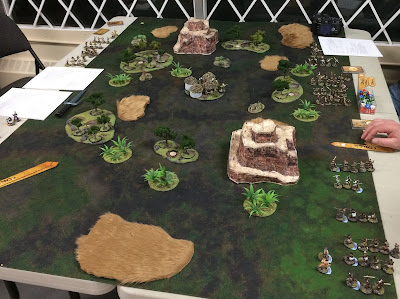 Bruce's terrain was very nice, including a couple of animal bases from an old Airfix zoo animals set. 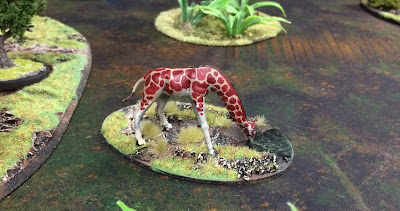 The open stages saw two-on-two conflicts emerge, as Bruce's forces (below) tangled with Terry's forces near the village.

Richard and I duked it out on the other side of the board, fighting over a marker to determine which corner of the board would be our exit point. Some very bad die rolls during the evening meant most combat was ineffective (although Terry's dice were notably hot). 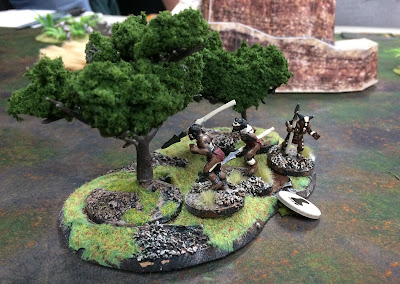 Below, Bruce's soldiers advance on the village while Terry moves to intercept. 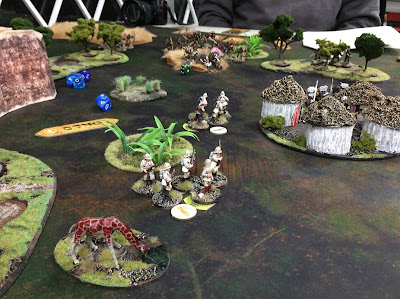 The first wave of locals greets Bruce's soldiers. Bruce was very focused on the treasure and sacrificed some units to buy time for his snipers and diggers to get to work. 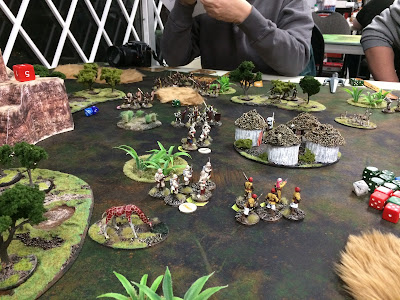 Eventually, Bruce cleared the guardians, dug up the treasure, and then the chase was on! Bruce's exit point was my starting corner. This worked out well for me as my own efforts to deploy had been shabbily organized and poorly executed so I had a lot of guys in front of him. 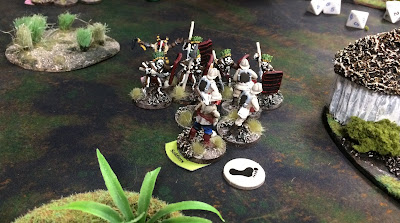 Meanwhile, Terry and Richard started converging behind him! Most of Bruce's forces were wiped out during delaying actions. Some how my last few pictures have disappeared but the upshot was I greased his remaining treasure carriers (below) and picked up the treasure and continued running towards my corner. 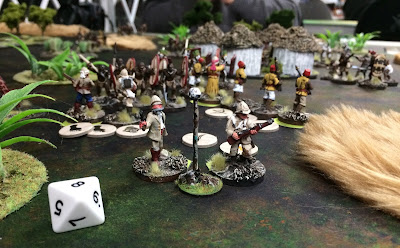 Terry tried everything to interfere and then Richard made a last ditch effort with Tarzan to pin me. Fortunately, neither of us could roll worth beans and I managed to retreat in a helpful direction. We called the game with a close win for the Emir.
at 5:00 AM

Another fun game of Congo to be sure!

Yeah Wish I had won due to good play rather than dumb luck. But I'll take it.