Last night Bruce set up his new Columbia game Victory in Europe. Oval map, 1939-1945, card driven, hidden units, step reduction. We played the first turn of the 1941 scenario in about two hours while learning the game. The map could stand to be a bit bigger but very interesting mechanics.

We had a real war in the Atlantic, Egypt was hard as hell to frigging capture for the Axis. Interesting strategic movement vs battles card mechanic. Incorporates strategic bombing, raw materials and manufacturing resources in a fairly simple mechanic. I look forward to trying the 1939 scenario. 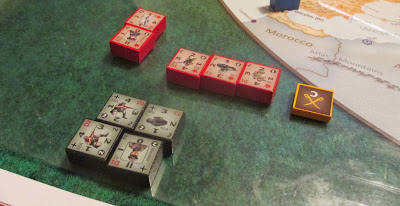