Terry's crawlspace yielded up some lovely old Matchbox 1/76-scale kits. The Panzer 3 may have been my first solo model, although I recall my dad buying me an Airfix Fokker triplane which I glue-ily built and displayed until it fell into the laundry hamper. At least the Red Baron met a clean death.

Anyhow, a trip down memory lane. The only kits I could get in northern BC in 1980 were Matchbox and the odd Esci kit. But the selection was very hit and miss (army entirely of Esci Bishops, anyone?). Places like Little Generals in Calgary were Mecca. Lovely kit, went together like a dream.

On a roll, I opened the Panzer 2. Again, lovely kit but the treads were a grey poly (unlike the black ones on the Panzer 3) that had undergone some sort of chemical reaction. Oily sheen over the sprues (that washed off with some soap) but the treads themselves were withered and brittle.

The TMP brain trust suggested zip ties would be a suitable replacement. I had two types in the tool box but wished I had some that were thinner. Overall, the tread effect is nice. I had to carve some of the upper hull off as well as the top of the treads to get a tight hull fit as the zip ties were too thick. 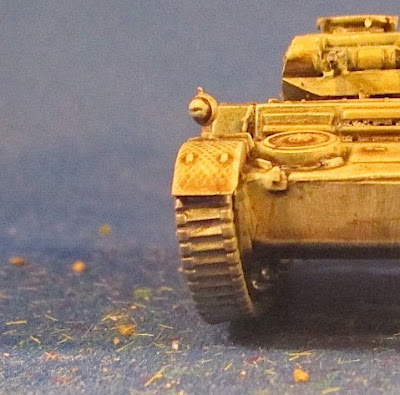 Alas, the tread pattern is not the same on both sides of the zip tie (below). Grrr. Didn't see this until the wash was on (the pattern was hard to see on the raw zip ties). (sound of cursing in German). I am not fixing this! 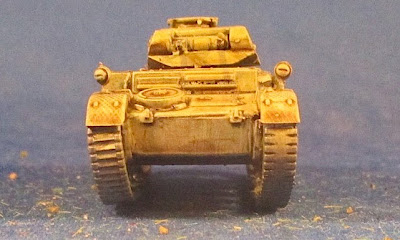 I tried two approaches for the treads. On the Panzer 2, I bent the zip ties and joined them. A bit sloppy even with crazy glue and the bogies got knocked about pretty badly. On the Wespe (which had the same problem and is still underway), I sectioned the treads (top and bottom flat and curved sections in the front and back to reduce the tension on the zip tie).

I'll post a comparison when the Wespe is done. Both approaches were a real pain in the ass (thinner zipties is the ticket) but were better than tossing these models.

Glad your having fun & taking a walk down memory lane all at the same time Bob!

Yres, love Matchbox kits! And now that I am older, I'll even paint them!