I agreed to host a game at MayDay this year involving a combination of map movement and miniatures play (the latter determining the timing of the troop arrivals on the former). Bruce agreed to come over to playtest one approach to this that was in Battlegames 20. I set up a basic Rome-on-Rome game with all troops moving first on the map and then arriving on board. 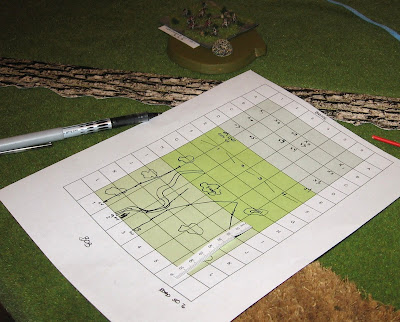 The pre-game proceed fairly well, but I think an area-movement approach would work better in a convention setting. It also better simulates the offboard traffic control issues of the battle I'm trying to model. Below, you can see my cheeky light horse units occupying one of Bruce's outpost hexes. 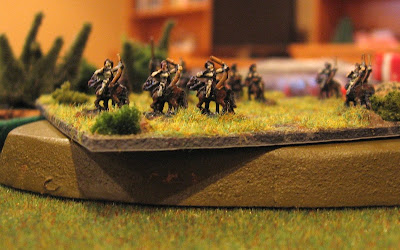 Then the heavies finally showed up, nicely modeling the staggered way in which armies appear in battle--the fast vanguard followed by the core. Below you can see my legion have come down the stairs, wheeled left and stand ready to attack.

Below we see the legions about to clash in the middle of some dodgy terrain. Bruce is advancing from the top of the picture and I surged forward, hoping to pick off the unit on the hill. Damned thing held out for at least three turns of pounding! 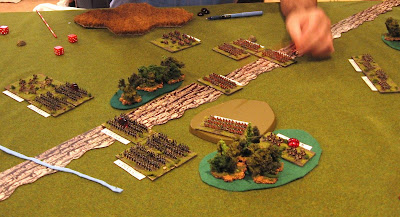 Here is a shot of Bruce's bowmen about to grease some light infantry. Apparently his units got issued with laser sights and depleted-uranium arrows. Good lord, what didn't they kill! 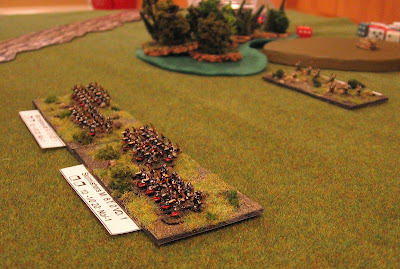 Another picture of Bruce's annoying bowmen!

And here is the end game, with Bruce's legion on the hill having held off my advance until he could bring a flanking unit around to finish me off. 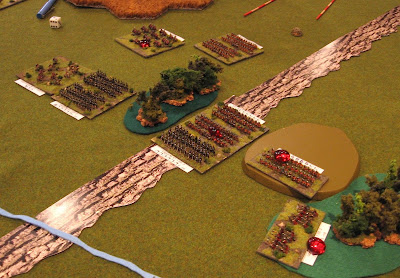 Overall a fun game using Basic Impetus. Bruce completely outplayed me the entire game and broke my forces. Afterwards, I recalled that we never did examine the actual victory conditions (which had something to do with setting up a picket line). Oh well! I learned a lot for my MayDay game and I will start to work through some of what we talked about afterwards. Definitely area movement is the better mechanic, but the map made for an interesting pre-game. This could be extended by adding in a couple of waves of troops.

Up next: 15mm New Kingdom Egyptians are on painting table along with camps for both them and their Hittite opponents. I'm not sure what will come next. I need to rebase some 6mm troops (AWI) for MayDay.
at 11:08 AM