Gaming at the club

We had 7 guys out at the club this week with three games on deck. Jonathan and Scott played some Commands and Colors Machine Guns. 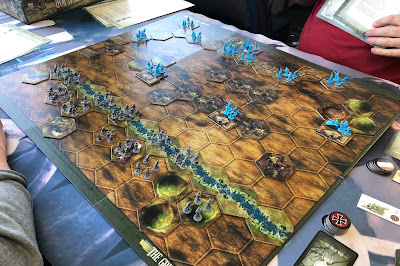 I think this was the Verdun scenario, with the Germans advancing over the Meusse River? I left before it was done, but it looks like the Germans were just running out of troops. 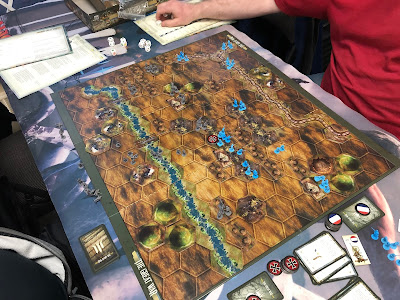 Dan hosted Terry and Richard in a game of Strange Aeons. RCMP and heroes versus cultists. 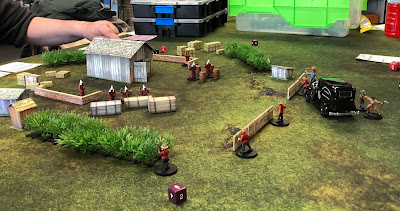 The cultists were selling some naked townies for meat to some little guys with big teeth. Gravel Road Cowboys had to rescue them. 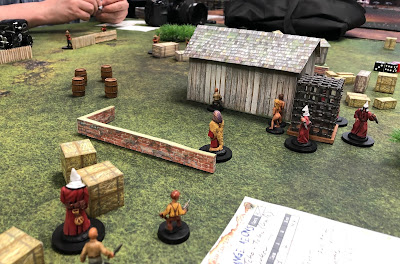 I left before this game reached conclusion. At that point, the body count looked like it was favouring Sergeant Preston and his kung-fu fighters. 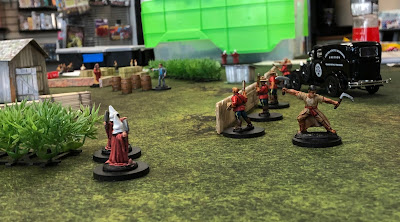 A very pretty game that Dan did a nice job of putting on. 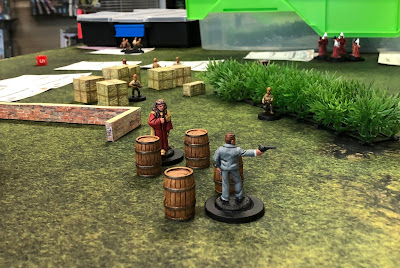 Chen and I played Battlestar Galactica with Newtonian movement. BSG is basically the same as Wings of War (movement on cards, simultaneous selection) and you can play it with cinematic movement or with Newtonian rules. 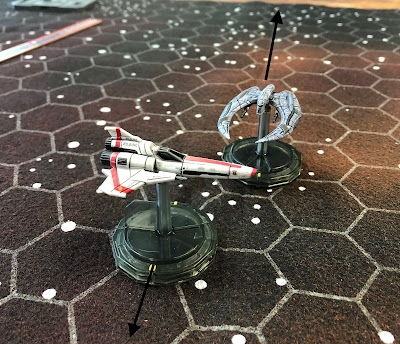 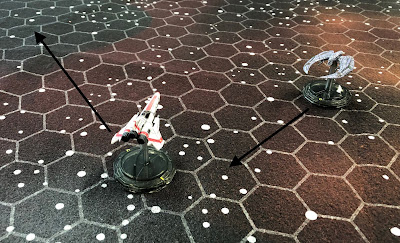 Once your facing is not the same as your direction of travel, your movement becomes restricted (you can drift on momentum or pivot and move (which may also have some drift). With good planning, this can allow you extended firing opportunities but also leaves you vulnerable to your opponent making a sharp turn and sneaking out of your arc (see above). 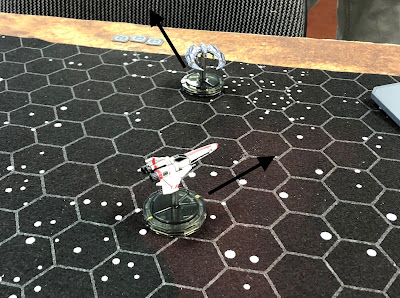 The effect of the Newtonian rules were interesting (rewards planning and good spatial skills) but hard to get used to. I'm still not sure I fully understood the movement rules by the end--there were some interactions between acceleration and kinetic energy I couldn't keep straight. I tend to prefer simpler game mechanics (a la X-wing) but the designer(s) made a good effort to incorporate complex concepts into (relatively) simple add-on rules.
at 9:01 AM

I thought they were Mounties even before reading the caption. The painting and game look very pleasing to the eye

The CCMG went sideways for the French when the Hun blitzed up the middle. The French just ran out of units to throw at them. Went down to the wire though for a narrow victory for the Germans.

Thanks. Dan did a lovely job of the terrain.

Thanks. Gotta give them credit for distilling a complicated thing into a manageable set of mechanics.

I know this post is a year old but I just found it and wanted to say how happy I am to see someone actually playing Strange Aeons with the cards I designed - it's nice to know folks are still getting use out of them! :D