Bruce put on a game of Target for Tonight this week. The rules simulate the British bombing campaign against Germany. 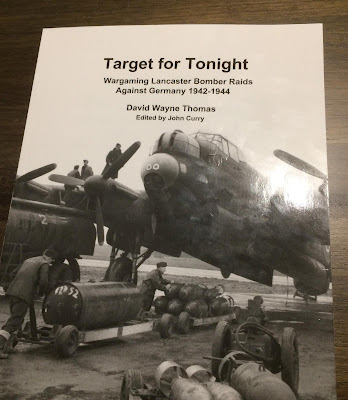 You each get a plane (although it would be possible to run multiple planes or even a squadron if you were keen). The crew have abilities that improve over time (if they survive). 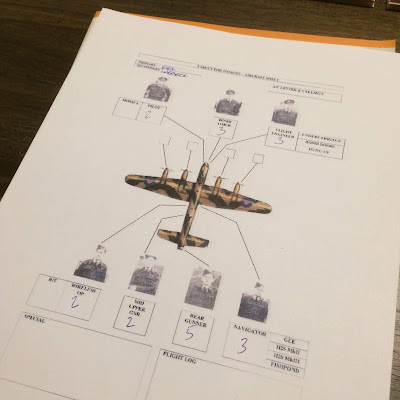 The game has area movement and would fit on a coffee table. Below you can see the entire set up. You start on an airbase (bottom right tile). You then move (clockwise) to the coast, across the sea make landfall, fly through a flak belt, hit your target and egress. The number and type of tiles depends on mission you roll. 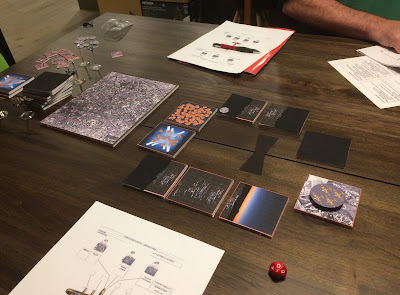 As you move from tile to tile, you roll for random events and the game could easily be played solo. The main weakness of the game is that there are almost no decisions for players to make--just lots of dice rolls. 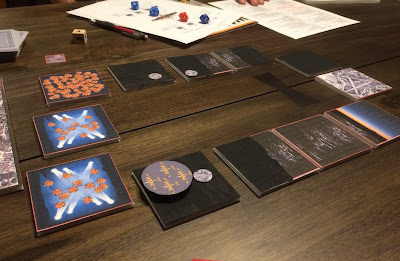 When you reach your target you use a card deck to navigate across the city towards a target square (not shown in this photo). Cards affect your movement, simulating winds navigation, and other challenges. There is some decision making here, but mostly the moves are obvious. 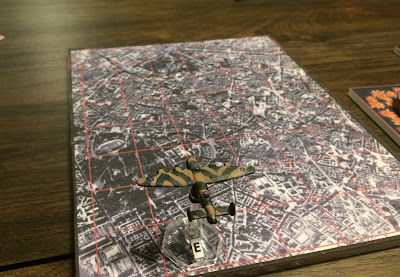 If you get jumped by a night fighter, you flip the bombing board over and you have a brief dogfight. Again, movement is drive by a card draw with most moves being obvious. 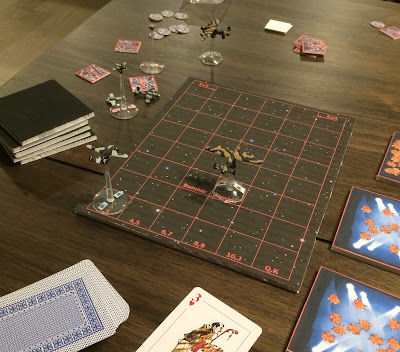 The rules are pretty slick once you get the hang of it. Bruce put all of the tables on a two-sided QRS. The layout of the rule book itself is appalling, with historical material interspersed with the rules. A QRS is a must to avoid endless flipping. This is really an inexcusable production error.

Overall, a pretty fun game and nice to have a solo option. The level of abstraction is nicely thought out. It avoids the paper-chase of B-17. As time passes, technology changes and each side gets new tricks and counter measures. I'd totally play again.

We played twice with one (of four!) bombers returning and no successful hits. There was literally nothing we could have done to change the outcome (except roll better) which is perhaps the biggest drawback of the game.
at 5:00 AM