Work took me to Saskatchewan last week and offered me a chance to drop in and see my friend Tim Brown. Tim agreed to put on a game and pushed through illness to finish painting up the troops! 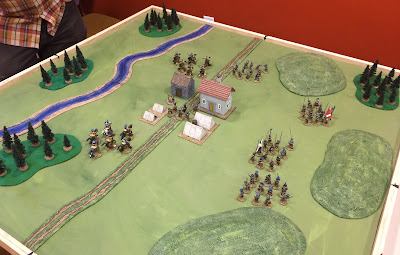 Scenario was attacker catches the defender sleeping in pre-dawn raid and tries to burn the buildings. I had a great set of activations on Turn 1 and everyone moved forward. Unfortunately for me, Tim's dice were amazing and all of his units woke up and deployed and he picked up some special figures. 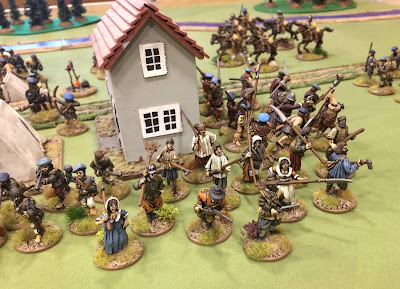 My two mounted units then charged his rabble and beat them bloody. 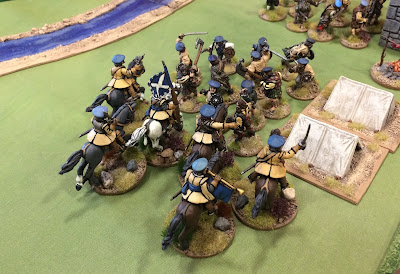 The pride of Saskatoon measuring to see if he has enough room to retreat! 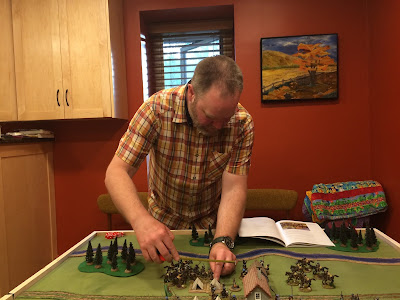 Another shot of my only moment of glory in the game as the first unit evaporates and the second unit is charged. 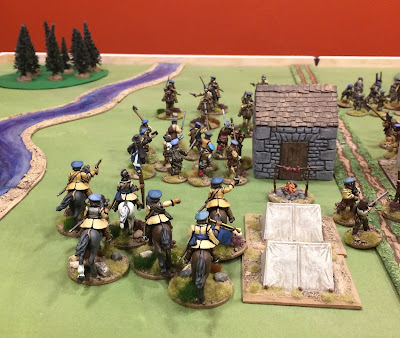 Tim responded by vaporizing one of my shooter elements (my morale dice were terrible all night). 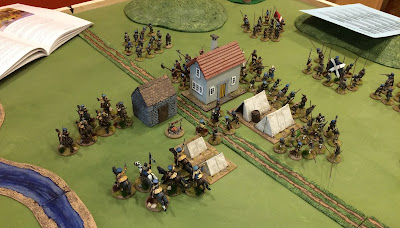 About this point, I made my only major tactical error and tried to burn the tents before activating other units. This was a harder roll than activation and I lost initiative. I did get to study Tim's amazing plaids while he plotted my doom. 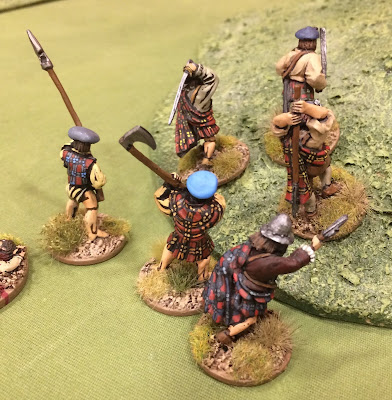 Then this happened and my dudes took a thrashing against the formed pike. I did eventually get this unit (which put me close to winning) but Tim routed other units as my morale dice continued to blow. 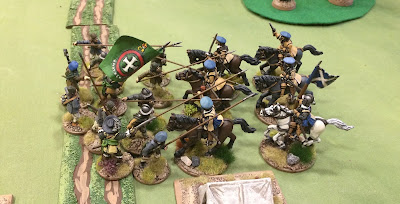 I think the picture below was pretty close to the end.  The formed pike unit on the left got run down and then my horse turned on Tim's command (middle of town). 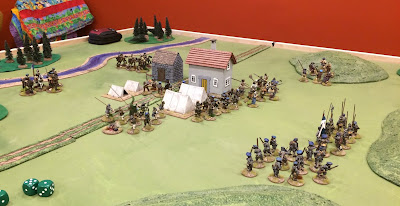 I charged, took casualties, he retreated, and then I had to follow up and got slaughtered! Game over! 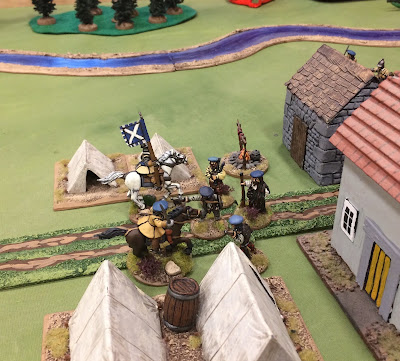 Thanks to Tim for a fun game of Pikeman's Lament. He mentioned a new SYW version of these rules due out for Xmas so I'm eyeing up rebasing my 1/72-scale War of 1812 figures as singletons.
at 11:41 AM

Lovely looking figures AND terrain in this battle. Sounds like you both had a great evening.

Thanks for stopping by, Bob, I had a great time! I thought it was a bit of a nail-biter. I was quite certain I was doomed when a full quarter of my force disappeared on the second turn without causing a single casualty! A few handfuls of insanely lucky dice rolls it what saved my kilted ass!

It was fun. Playing with Tim's toys is always a joy. There is exactly the right amount of detail painted on them and looking them is very pleasing.

Yeah, I was pretty cocky after the first turn. Then things went a touch down hill. Thanks for hosting, it was the highlight of my trip. Not as exciting as a kayak rack failing half way to Regina, but a close second.