FUBAR at the club

We had six guys out at the club on Tuesday. Terry and Dan played a game of Shadows of Brimstone (no pictures turned out, alas). Bruce hosted Richard, Chen and myself in a game of FUBAR 2. 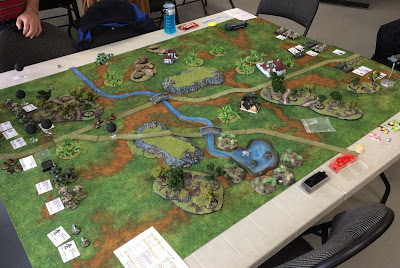 The good guys (left) enter and must capture the white farmhouse on the far right. The bad guys entered on a die roll from the right. The dice were unkind and this gave the good guys lots of time to move across the board without taking much fire. 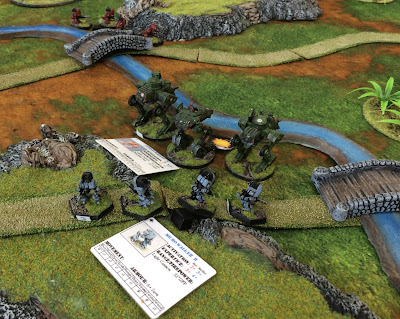 Eventually, we were able to secure the bridges and move our foot across them under cover of fire from the walkers.  Richard managed to seize an important ruin to jump off from in his final push on the objective. 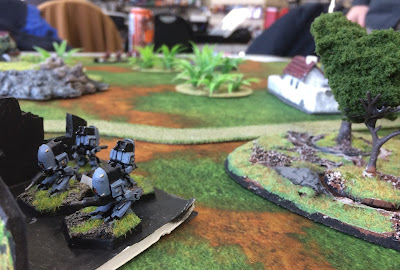 The bad guys did eventually get their troops on board but had a terrible time with the dice and got picked apart. 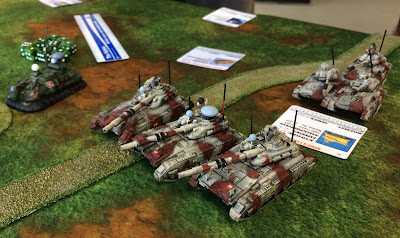 Below, Richard has rushed the house and shortly thereafter forcefully evicted the former tenants. Despite some casualties, his troops were firmly entrenched. 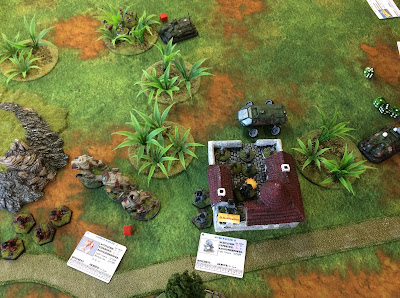 I managed to work one of my mechs around the right flank to surprise the bad guys with a ATGM. Alas, it did precisely zero damage before getting knocked about pretty badly. We called it for the good guys after about 100 minutes of play. 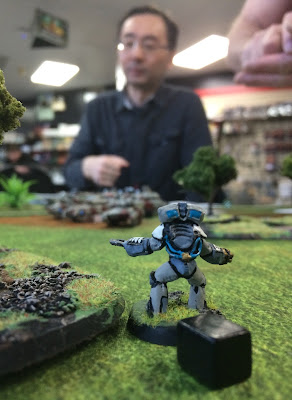 Pretty slick rules. Bruce suggested dropping the firing ranges to allow a bit more maneuver. This seems sensible. The damage mechanics saw even saved hits causing damage and glancing blows was a nice touch. It made me reluctant to expose my vehicles unless it was absolutely necessary.
at 5:00 AM

Wow. Glad to see FUBAR still being played!
What mods has your group made to the rules?

Not many. I think ranges have been reduced quite a bit (to all more movement). There were updated rule son Boardgame Geek, I think.