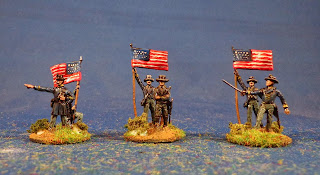 Up next: I have club this week. I've just built and spray primed four 1/72-scale gatling guns with British crews that will get some attention this week (weather pending). After that, there are various ancients milling about on the shelves.
at 12:07 PM

Hi Bob,
The photo on the bottom was easy. The second figure from the left is firing a flintlock pistol, is wearing an AWI uniform and what looks like a light infantry cap. Please don't tell me he was in the box of dismounted cavalry....
It's too bad that they simply could not have molded cavalry carbines for the figures.
Good painting, though.
Jerry
A/K/A The Celtic Curmudgeon

Thanks! I guess we can't expect a set for every period in every pose! These will do for my game, anyhow. Good spotting on the AWI guy despite the soft focus on my pictures.

Bob... those single soldiers also look great! are they on 25mm bases? I think that I will go for one/penny size basing, since it highlight the look of the miniature... what do you think?

Hernan, Thanks! The individual troops are based on metal washers bought in bulk. The washers are about 10mm in diameter. The groups are based on 20mm washers.