We played the fourth year of the EDBAG DBA Campaign this week. Things were pretty balanced at the start of the game, with the map looking like this: 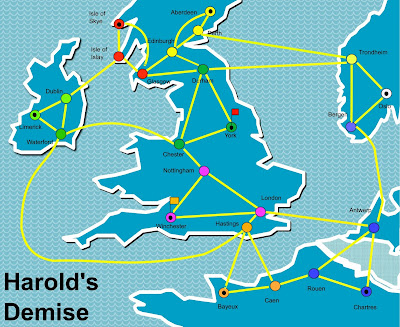 The various factions were:

After rebuilding armies, war was declared and the spring battles ensured. The White Vikings (with a contingent from The Pre-Feudal Scots) took on the Blue Normans at Bergen. The Blue Normans were sent packing back to Antwerp.

At Nottingham, the Scottish Islanders met the Anglo-Danes and a contingent of Orange Normans, inflicting a handy defeat upon them. In the west, the Green Vikings moved on Limerick, facing the terrible Norse Irish battle cry of "Wherul ah sixahs" and were demolished.

The autumn saw a further fight between the Blue Normans and the White Vikings (aided by the pre-feudal Scots) which the Blue Normans handily won. In the west, the shattered remains of the Green Vikings were trounced by the Norse Irish and the remains of the army were lost during the voyage back to the mainland. The Orange Normans were unsuccessful in their siege of Rouen. The map on the cusp of 1070 looks like this: 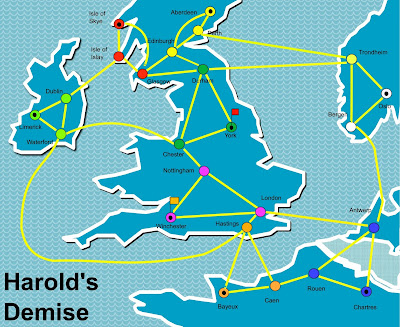 I will need some assistance in filling in the dispositions. I think I have the prestige points correct but have entirely lost track of the army sizes:

Up next: Some 28mm Normans are being based up and then onto a 15mm Macedonian DBA army!
at 9:52 AM

Thanks for the update Bob.

I have 10 stands left, I presume at Chester since we twice failed to take Nottingham.

I should also have 6 prestige, the win was 4-0 (+4 prestige) and there are no bonus prestige for taking a contingent general, only the main enemy protagonist.

I should have 8 stands left (11 at beginning, general lost counting as 2, and 1 lost at Rouen) to be built up back to 12 by next year.