I finished a few more AWI guys last night for a commission. These figures are the 2nd South Carolina and are in 15mm.

Overall, very nice figures and I think the basing turned out pretty well too. 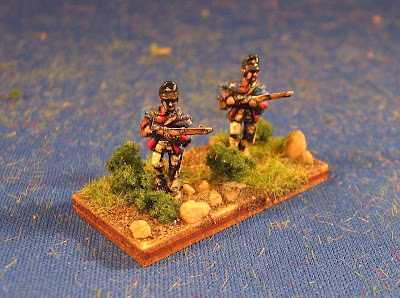 Up next: After a short vacation from painting (Canadian Thanksgiving), I will be back with more 15mm AWI, some 28mm Anglo-Danes, some 28m siege weapons (built and painted--just need to build some crew) and some action from the second night of the EDBAG campaign.
at 7:29 AM

hi bob was just looking at your blog,i dont no how you managed to paint these litte guys it makes my eyes blury just looking.nicely painted thoe

Thanks Paul. No real trick here. Black primer, block paint, dip and base. Most guys at the club do a much better job than I do. But quantity has a quality all of its own!