Bruce dropped by Wednesday afternoon for a "last day of vacation" game. I've been playing a fair bit of Basic Impetus with Bruce and Mark, adapting it for the AWI. Those rules are pretty much nailed down and ready to go off to Miniature Wargames.
When we were playing, Bruce mentioned that he thought the game lacked the sense of maneuver that characterizes lots of horse and musket games. So it does a good job of Guilford Courthouse or Camden. But not so great for Saratoga or Germantown.
After some talking, we decided to scale the rules down from the 80mm frontage to 40mm (thus halving other movement) and use blinds to disguise which troops were which to see if we could add an operational element to a great tactical system. I decided to try Brandywine (because I was familiar with it and Bruce had a good orbat). The 6x4 board looked like this: 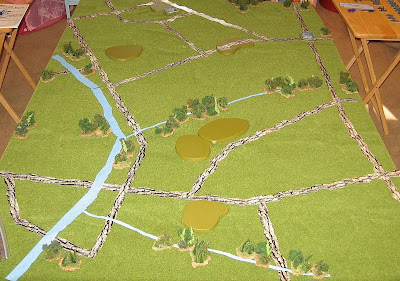 The British entered from the left and top and the Americans deployed to the right of the river and about 12 inches in from the top. Historically, the British made an attack across Chadd's Ford (bottom left) while sending the other half of their army around to attack from the north.
We rolled for attacker (I got to be British) and then secretly made up our brigades and placed 160mmx40mm blinds on the table. You can see (below) I threatened everywhere, including Chadd's Ford and at the top. The weight of my attack was at Chadd's Ford, with one battle group at the top trying to sneak over and then down the far side of the board to cut of Bruce's retreat and bag the whole Continental Army (cheeky bastard!). Bruce covered everything with screening forces and, as it turned out, held his weight in reserve until he could discern what I was up to. 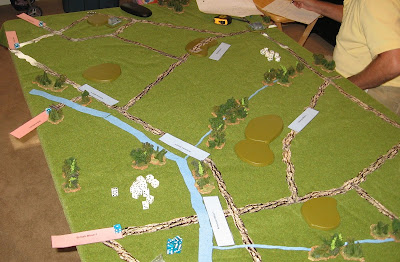 A few turns in (below) and the Dragoons have begun revealing portions of each blind in the north. In the south (top right of picture), a significant portion of the first (of three blinds) has been revealed. The first two were full to the gills with grenadiers. The third was empty. 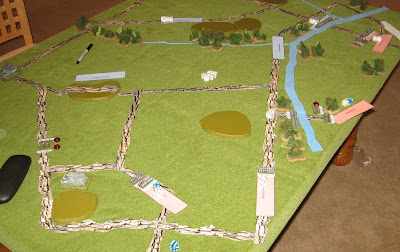 The assault over Chadd's Ford began in earnest, with the red coats being made of kevlar (Bruce could not get a hit to stick!). But his reserve was also thrown in. 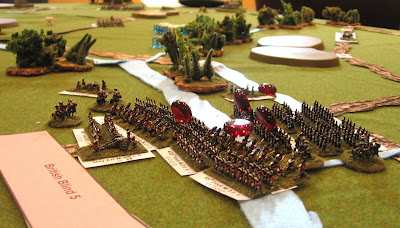 Here, casualties are beginning to tell on the British, but bayonet charges are starting to decide the day. In the north, Bruce (cagey fellow he is) delayed the hell out of my column by forcing me to deploy to deal with a single battalion of continentals. The blinds worked really well at creating fog of war. 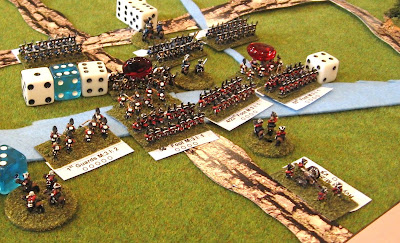 Finally, though, things were decided at Chadd's Ford with the Americans pushed over the break point. As I wasn't able to cut off much of his army, I only won marginally (about historical).

Overall, I thought this was a fun mod to add to Impetus AWI. It created a sense of maneuver and of having flanks and competing priorities. Bruce likely could have stopped me at Chadd's Ford if he had been able to commit his remaining reserve, but my northern attack required him to keep those troops in reserve until it became apparent what I was doing. Great game!
Next up: Some 1/72 goblin light infantry.
at 12:24 PM